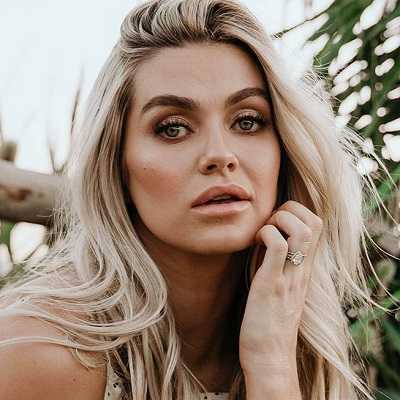 Lindsay Arnold is happily married to Samuel Lightner Cusick. His husband, Samuel is a business entrepreneur by profession.

The couple had been in love with each other since their High School days. After dating for a long period, they got engaged with each other on 9th December 2014 in Africa.

The following year, they tied the wedding knot on 18th June 2015. The wedding took place at the Salt Lake Temple in Salt Lake City in front of 150 guests. The fellow Dancing with Stars dancers; Jenna Johnson, Emma Slater, Brittany Cherry served as the bridesmaids whereas Witney Carson became the maid of Honors.

Together, the couple is blessed with a daughter, Sage Jill Cusick (b. 2nd November 2020).

Who is Lindsay Arnold?

American Lindsay Arnold is a professional Latin and Ballroom Dancer and Choreographer. She is renowned as the contestant of So You Think You Can Dance.

Last, in 2020, she made her appearance in the TV program, Entertainment Tonight as a co-host.

Lindsay Arnold was born on 11th January 1994 in Provo, Utah. She is of British-Germanic ethnicity.

She is the eldest daughter of her parents; Mindy Arnold (mother) and Josh Arnold (father). She has three siblings; Jensen Arnold, Rylee Arnold, and Brynley Arnold.

Moving towards her academics, she completed her High School education at the Timpview High School. Later, she attended Utah Valley University.

At the age of four, she started taking her dance training in Utah. At the time, she took dance training under the nation’s top teachers including Mark and Shirley Ballas.

Following the show, she made her appearance in the show, Dancing with the Star as the choreographer partner, Victor Ortiz. In the season, she became the second-youngest professional dancer to be a choreographer. They completed the season at the 8th position.

After the season, she made her appearance as the choreographer partners of the personalities like Alek Skarlatos, Wanya Morris, Calvin Johnson, David Ross, Jordan Fisher, and DeMarcus Ware.

Last, in 2019, she became the choreographer partner of the political aide, Sean Spicer. They got eliminated from the show and got the place of 6th position.

To date, she has not stepped inside any sort of controversy and scandals that created headlines in the media. Besides that, she has managed to maintain distance from any kind of rumors.