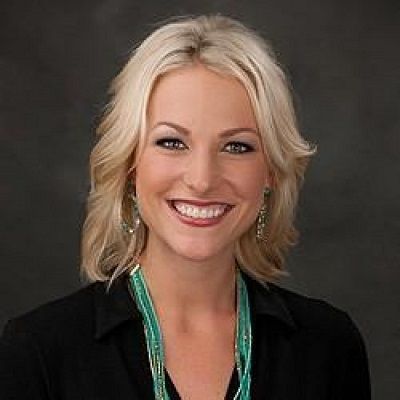 Lindsay Czarniak is happily married to Craig Delano Melvin. Her husband, Craig is also a journalist by profession.

He proposed to her several times. However, each time she turned him down. Eventually, their love life started in October 2009. After dating for two years, they got married to each other on 15th October 2011.

The wedding took place in the Church of Holy City in 16th Street NW among friends and family. Together, the couple is blessed with two children including a son, Delano Melvin (b. 2014), and a daughter, Sybil ‘Sibby’ Ann (b. November 2016).

Who is Lindsay Czarniak?

American Lindsay Czarniak is a sportscaster and reporter. She is renowned for reporting National Football League Games.

Currently, she is associated with Fox Sports as the studio host for NASCAR.

Lindsay Czarniak was born on 7th November 1977 in Harrisburg, Pennsylvania. She moved to Nothern Virginia along with her family at the age of 5 years. Her birth name is Lindsay Ann Czarniak. She is of Polish ethnicity.

Her father, Chet Czarniak is a sports journalist. Whereas her mother, Terri is a former principal of Rose Hill Elementary School in Alexandria. He has a brother, Andrew Czarniak. Andrew is a military officer.

During her university day, she used to be a member of Sigma Kappa.

When she was in college, Lindsay Czarniak joined the channel, WUSA as an intern. Later, she joined CNN as the production assistant. For the first time, she was aired as a news reporter through the channel, WFOX-TV. At the time, she worked for the other three channels; WTEC-TV, WTVJ, and Speed.

In 2005, she stepped into WRC-TV as the sports anchor and reporter that gave her career push towards the sports. The following year, she started co-hosting the channels’ program, The George Michael Sports Machine. The year, she even covered the Winter Olympics for NBC Sports which became a milestone in her career.

In 2007, she became the first sports reporter to interview Washington Redskins players in the matter of the murder of Sean Taylor. The next year, she represented NBC as a sports desk reporter in the 2008 Summer Olympics in Beijing, Also, she wrote several blogs for WRC-TV’s website.

Later, she also hosted the show, Gymnastics on Oxygen on the channel, Oxygen. On 23rd June 2011, she left the WRC-TV to join the ESPN channel. She started covering the preseason football games for the channel on 19th August 2011.

On 24th April 2013, she hosted the ABC’s program, Indianapolis 500 which made her the first woman to host telecast. In August 2017, she left ESPN as her contract expired with the channel.

Afterward, she joined the professional stock car racing to produce the digital content of the team. Also, she presented Netflix’s reality competition show, Hyperdrive. On 5th February 2019, she signed as the studio host to cover the NASCAR. Currently, she hosts the TV program, Fox and Friends.

Lindsay Czarniak has blue eyes with blonde hair. She stands at a height of 5 feet 7 inches and has a decent weight. Her body measurements are 34-27-34 inches.

As of now, she has not been through any sorts of controversy and scandals that created a buzz in the media. Besides that, she has managed to maintain distance from any type of rumors.

You may also read the bio of Julian Morris, Richard McVey, and Steven V. Roberts.