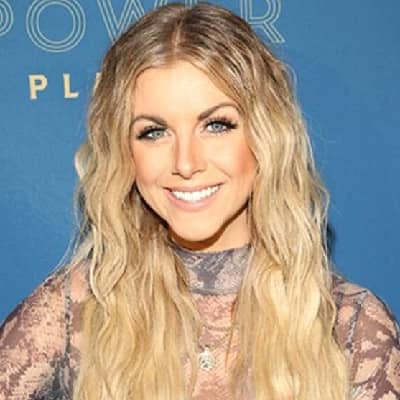 Previously, she started dating the famous American on-air radio personality and entertainer, Bobby Bones in 2015. He had confirmed their relationship through an Instagram post on October 26, 2016.

Later, they parted away in 2017 after a relationship of over 2 years.

Who is Lindsay Ell?

Lindsay Ell is a Canadian music singer, songwriter, and guitarist. She is best known for her albums like The Project, The Continuum Project, and Heart Theory.

In an interview recently on 2020 July, she revealed that she has twice survived rape first at age of 13 and at 21.

Lindsay was born on March 20, 1989, in Calgary, Alberta, Canada. Her birth name is Lindsay Elizabeth Ell.

She was grown up in her hometown with her older brother named Shawn. She seems to be close to her parents and also often posted photos with them on her social media account. Though their names aren’t disclosed.

Lindsay holds Canadian nationality and is of mixed (German and Dutch) ethnicity.

Ell was discovered by Randy Bachman, a popular musician when she was only 15 years old.

Lindsay attended Bishop Carroll High School. She was valedictorian for her class at the School.

Then she went to the University of Calgary to study business. And finally, she attended Berklee College of Music and studied music to pursuing her music career.

Lindsay Ell’s professional career started when she released her album Consider This in 2006. Ell co-wrote the entire album with Bachman. The album was released at Batman’s studio.

In 2008, she has a music tour with blues guitarist Buddy Guy. Her second album, Alone was released in 2009 which includes more acoustic sound. At the age of 21, she signed with the US record label, Stoney Creek Records after moving to Nashville.

In December 2013, her first official single, “Trippin’ on Us” was released being debuted as the most added song for country music radio in both Canada and the United States.

Lindsay is also a guitarist whose style has been influenced by John Mayer, Keith Urban, Tommy Emmanuel, and many more. She is an official Martin Guitar artist and also plays a custom Les Paul Goddess.

She made her Grand Ole Opry debut on 15 April 2014 and has made different appearances on the show afterward. On 24 March 2017, Lindsay released her debut EP, Worth the Wait.

Her full-length country album, The Project was released in August 2017 which was also debuted at No. 1 on the Billboard Country Album Sales Chart.

Ell sang the Canadian National Anthem at the 2018 NHL All-Star Game. She further performed at the C2C: Country to Country festival in the UK.

In 2019, she received a Canadian Country Music Association for Interactive Artist of the Year too. Meanwhile in 2020 June 26, she released her new album, Heart Theory.

She made her TV show debut in 2017 on the famous TV series Jimmy Kimmel Live!

Being one of the successful personality, her net worth is around $1 million.

Her albums were hit with good commercial success and one of them was also at No. 1 on the Billboard Country Album Sales Chart. So, she must have good earning.

Lindsay Ell stands tall with a height of 5 ft 6 in (1.68m) and weighs 55 kg (121lbs). She has natural dark brown colored hair but she prefers it to dye into blonde.

Likely, she has a fair complexion with prominent blue eyes.

Furthermore, She has her own YouTube channel with 142K subscribers. She also uses Tiktok and has over 27K followers.

Also, get to know about other popular singers like Carly Rae Jepsen, Lynn Chen, and Shaznay Lewis.