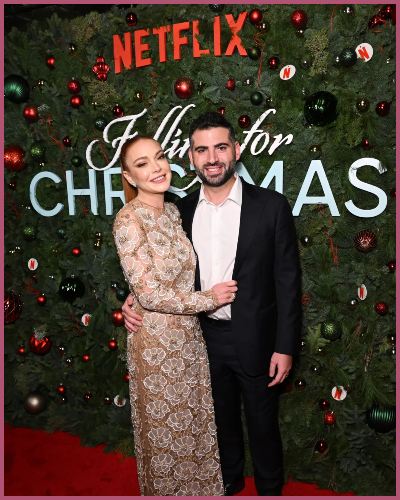 What a lovely pair Lindsay Lohan and Bader Shammas make!

The actress made her red carpet debut with her husband Shammas on Wednesday night. The couple was at an event in New York City for the screening of Lohan’s new Netflix film, Falling For Christmas.

The pair looked very much in love with big smiles on their faces as they wrapped their arms around each other and posed for photographers.

Bader even showed his support to his wife by sweetly placing his arm around Lohan’s waist.

The Mean Girls actress, 36, looked stylish and chic in a sheer, beaded floral Valentino gown that perfectly accentuated her figure. She wore platform heels to match her dress and did her hair into a tight high ponytail.

Bader, on the other hand, looked handsome in a classic black suit, white shirt, and shiny black shoes.

Lohan’s holiday movie premiered on Netflix on Thursday. The movie is about a young, newly engaged heiress called Sierra Belmont, played by Lohan, who gets into a skiing accident days before Christmas.

After being diagnosed with amnesia, the character finds herself in the care of a good-looking cabin owner and his daughter Olivia Perez, played by Chord Overstreet and Olivia Perez, respectively.

This is Lohan’s first red carpet-appearance since her marriage.

In July, news broke that the Freaky Friday actress and Bader tied the knot just hours before her 36th birthday.

A rep revealed at that time:

“I can confirm Lindsay Lohan is married,”

Also, Lohan posted a photo with her Bader some time ago that seemingly confirmed their engagement.  She wrote:

“I am the luckiest woman in the world. He found me and knew that I wanted to find happiness and grace, all at the same time. I am stunned that this is my husband. My life and my everything. Every woman should feel like this everyday.”

Bader, a rich Kuwait-born financier reportedly met the actress when she was residing in Dubai. After some months of dating, he popped the question in November 2021 with a stunning Harry Winston ring.

Lindsay’s dad, Michael Lohan, at the time said that he gave Shammas his approval.

“He’s not a Hollywood type. You don’t see any pictures of them in the press. That was one of Lindsay’s problems — the paps encroaching on her and coming up with stories. It was tough. But she’s with a guy who doesn’t like the limelight,”

“Everyone’s happy. Lindsay got her life back when she met him. She’s been living a really happy and healthy life.”

This is Lindsay’s first marriage but definitely not her first engagement. The actress was previously engaged to Russian playboy Egor Tarabasov but they parted ways in 2016.

Also, in 2002, Lohan was engaged to Wilmer Valderrama but the two called it quits after just four months of togetherness.