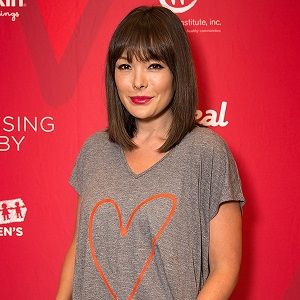 Work used to be the No. 1 important thing to me. Everything revolved around it, and to have a new perspective and have something else, my family, not just being a mom but being a part of an incredible family of my own, it makes me have a different perspective on life that I think is richer

I have to just get up early and make sure I run. I'll do 40 minutes, four miles. It's not easy, but it clears my head.

Beautiful and charming, Price is a married woman. After being in the relationship with Curtis Stone, an Australian celebrity chef, for several years, they became engaged in July 2012 and finally got married on June 8, 2013.

They have already welcomed two God gifted sons named Hudson Stone and Emerson Stone. Price was previously married to Shawn Piller in July 2004 and unfortunately got divorced in 2007. Currently, Price is living happily with her current husband and children.

Who is Lindsay Price?

Lindsay Price is an American actress and singer. She is extremely prominent for her role on “Beverly Hills” and “90210” as ‘Janet Sosna’ and also her contributions to soap operas such as “All My Children” and “The Bold and the Beautiful”.

She has made respectable position in American entertainment field and has earned more fame and fans.

Price was born on December 6, 1976, in Arcadia, California, U.S.A. Her nationality is American and belongs to mixed (German, Irish, Asian) ethnicity.

She was born to William Price(father) and Haeja Diane Price(mother). She has a brother named Bryan Price. She was raised by her parents in California in an entertaining and musical environment.

Her parents used to encourage her to pursue a career in educational field; however, she was interested in acting and music from the very early age.

Concerning about her educational background, she attended Art Center College of Design located in Pasadena, California.

Price started her career singing the Toys-R-Us theme song in one of the advertisement. Afterward, she started appearing in different film and T.V (shows and series) with a small role. Her debut film was “Purple People Eater” (1989) where she appeared as a ‘Kory Kamimoto’.

She made her T.V debut in “Finder of Lost Loves” (1984) and appeared as “Lan” in the episode of ‘Yesterday’s Child’.  In 1998, she joined a cast of Beverly Hills, 90210 as ‘Janet Sosna’ and got the more positive response and hugely popularized.

She has written and presented on a five-song EP entitled “Someone Like Me” which was released in 2007.

Lindsay Price: Salary and Net Worth

Once Price and her husband Curtis Stone became a part of rumor when Price kicked Curtis when she was pregnant; they didn’t take that situation so seriously as the fans and critics were taking.

Being in a respectable position, there are other desperate rumors regarding Price’s personal and professional life. Also, she hasn’t been a part of radical controversy yet.

Lindsay has the height of 5 feet 7 inches. Her body weighs 56kg. She has dark brown hair and dark brown eyes.