Lindsay Sloane is a famous American actress. She is married since 2004 and has two daughters with her husband. 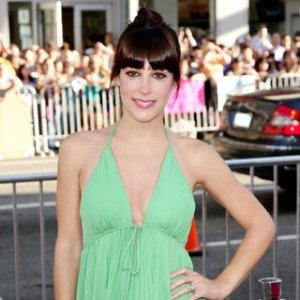 When actors are comfortable enough, and you release all your inhibitions, and you stop judging yourself, you're suddenly so supportive that it's this wonderful team cheering each other on.

I kind of learned that I am way too tough of a critic on myself and that other people are not judging me as harshly as I judge myself, so I need to give myself a break.

Lindsay Sloane had an affair with an American musician and former actor, Nate Richert in 1999.

They soon broke up but the reason for this split is not known. Both have maintained silence on this issue. Lindsay later started dating an agent, Dar Rollins and they married in 2004.

She gave birth to her daughter on January 19, 2012, and named her Maxwell Lue Rollins. On 3rd December 2016, Lindsay Sloane announced that she is pregnant.

Then in May 2017, she was blessed with another daughter, Pippa Jean.

Who is Lindsay Sloane?

She was born on Aug 8, 1977, as Lindsay Sloane Leikin-Rollins, on Long Island, New York to Jewish parents. So her ethnicity is Ashkenazi Jewish.

She had taken to acting as an outlet for her hyperactivity in childhood. Her mother, Renne was a librarian, and her father, Joey Leikin is a sales manager. It is not known whether Lindsay has any siblings.

Her parents especially her mother were very supportive of her acting ambition. She signed up with an agent at the age of eight years. About her education, she attended Chatsworth High School in Chatsworth, California.

About her education, she attended Chatsworth High School in Chatsworth, California.

Lindsay Sloane debuted on television on ‘The Wonder Years’. She featured in ‘Win a date‘ in 1998. She was seen inSeven Girlfriends‘, 1999 ‘The Other Guys’, and ‘Horrible Bosses‘. She has also appeared in TV films like ‘Sabrina Down Under’, Student Affairs’ and much more.

Lindsay is a talented actress and has won appreciation in her career for her acting skills. She also appeared in the famous series, How I Met Your Mother.

Her close friend is also an actress, Sarah Michelle Gellar.

This actress’s net worth is estimated at around $2 million. She is also involved with a social organization named No Kid Hungry.

Her featured movie of 2014 Horrible Bosses 2 has earned around $107.7 million at the box office. As per the sources, the average salary received by an actor is around $19k-$210k per year.

Sloane is rumored to be having an affair with her ‘Sabrina The Teenage Witch‘ co-star Nate Richert. But this could never be confirmed. They soon were not seen together and it was believed that they have split.

Lindsay never faced any major controversy during her career and also did not have any rude criticism of her work.

Lindsay is active on social networking sites. She has more than around 22.3k on Instagram.

Moreover, she is followed by more than 277k on Facebook and she has around 415 followers on Twitter.

Blessed With The Angel! Pregnant Lindsay Sloane Welcomed Her Baby no.2 With Her Husband Dar Rollins