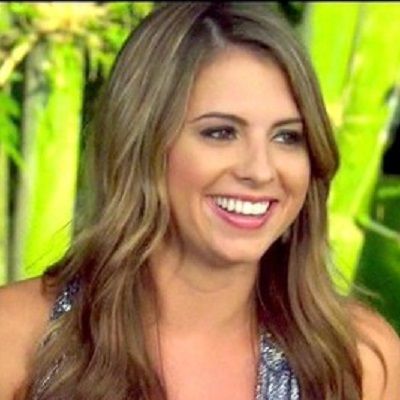 Love is in the Air!

Yenter left the show with a broken heart. However, she found her soulmate, Karl after the show.

Through her Instagram post on the 27th of October 2014, she announced that they are engaged with a picture of an engagement ring on her finger.

Finally, the lovebirds married on the 7th of November 2015 in San Diego, CA. She shared a glimpse of her wedding, where she is walking with her father in a beautiful wedding dress.

Apart from that, she has a soft corner for dogs too.

Who is Lindsay Yenter?

Lindsay Yenter is an American TV personality and substitutes teacher. Yenter is renowned as a contestant of the TV Game Show series, The Bachelor.

She also featured in the TV series, The Bachelorette.

Lindsay Yenter was born on the 1st of March 1988 in Fort Leonard Wood, Missouri, United States. Her father, Late Mark William Yenter was a former Major General. He is of Germanic ancestry.

She graduated from High School in North Carolina. Later, she attended a college at the University of Nevada in Reno.

The season featured a former Kansas State football player, Sean Lowe from McKinney, Texas. There were 24 women including AshLee Frazier, Desiree Hartsock, and Catherine Giudici along with her.

She became the runner-up of the season making Catherin the winner and wife of the football player, Sean. Currently, Catherine and Sean are living in Irving, Texas with their two children.

After, the series, she appeared in the show, The Bachelorette for an episode. The show is based on the same theme as the previous show.

The budget for her show, The Bachelor is around $3 million US.

She is a brown-eyed brunette. Her height is 5 feet and 1 inch.