Talking about her relationship details, Lindsey Gort is happily living a married life with her boyfriend, Beau Laughlin. Beau is a producer and has worked in movies such as The Canyons and Guys.Laugh

The couple tied the knot on 18 July 2015 in Silver Lake, Calif at The Paramour Mansion. However, they do not have any children as of now. Lindsey and her husband live happily without any complications. 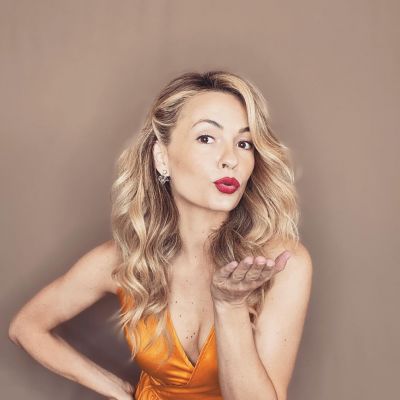 Who is Lindsey Gort?

Lindsey Gort is a well-recognized American actress and television personality.

Gort is widely famed for her role as Samantha Jones on CW’s The Carrie Diaries and Amy Quinn on the legal drama series, All Rise.

Moreover, she is also known for her works in A Million Litte Things, Modern Family, and Lucifer.

Lindsey Gort was born on 24 April 1984. At present, she is 38 years young star. Likewise, her birthplace is Scottsdale, Arizona, USA.

Not much is known about her father and mother’s details, Lindsey has been secretive about her family details. Moreover, she has not mentioned her sibling’s information in the public yet.

Talking about her nationality, Gort holds an American identity whereas her ethnicity is Caucasian.

Regarding education, the actress might be well-educated. She has not stated her academic background to the public.

At a young age, Lindsey was involved in the local theater and she appeared in 2009 in a short drama titled Goodbye horses. The star then performed in the drama thriller, Forgotten Pills in 2010 and the TV movie, Wing Bitches. She also played a minor role in the 2013 action film, 2 Guns.

Moreover, Gort received her first lead role in 2013 when she portrayed the role of young Samantha Jones in the Sex and the City prequel series, The Carrie Diaries. Her previous version of the character was portrayed by Kim Cattrall. In March 2015, Lindsey became part of the dark-comedy sitcom series, Impastor in a recurring role.

In 2016, the actress appeared in the CBS TV comedy movie, Real Good People. She became a part of the DC comics character, Detective Amy Rohrbach on the superhero show, Titans in September 2017. Gort then performed the role of Amy Quinn on the CBS legal drama series, All Rise.

Other than that, she has made her appearance as a guest star in Lucifer, Baby Daddy, Modern Family, and American Housewife.

A famed star, Gort has earned a handsome amount of money from her profession. She has been active in her profession from the year 2009 till the present.

It is reported that Lindsey Gort has an estimated net worth of $7 million as of 2022.

Lindsey has never been part of any controversial matter or rumors till now. The star has been preoccupied with her professional and private life.

It seems that Gort prefers enjoying her personal life and does not want to merge it with her professional life.

37 years young star, Lindsey has beautiful looks and an admirable personality. She stands at a height of 5 feet 4inches. Also, she has a balanced body weight of 59 kg.

Furthermore, Gort has blue eyes whereas her hair is blonde. Her body measurement is 33-26-34 inches(chest-waist-hip) respectively.

Regarding her social media presence, Lindsey Gort is an active personality on social media. Lindsey has more than 40.2k followers on her official Instagram account @lindseygort.

She is also active on Twitter with around 13.7k followers.