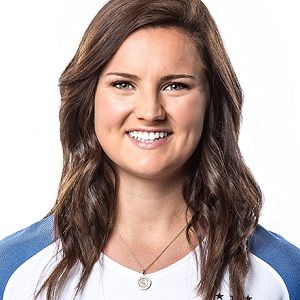 What is the relationship of Lindsey Horan?

Lindsey Horan is an unmarried woman. Currently, she is in a relationship. However, there is not any information regarding her boyfriend and relationship. As of now, she has kept her personal life so private that no one is aware of it.

However, Lindsey seems to be very happy with her relationship. So far, she has never seen with any other man in the public and media. Currently, the American soccer star is enjoying her personal life and living beautifully.

Who is Lindsey Horan?

Lindsey Horan is an American professional soccer player. Currently, Lindsey Horan plays for the Portlanders Thorns FC of the National Women’s Soccer League as an attacking midfielder. Previously, she has also played for Paris-Saint Germain in which she managed to score 46goals in 58 matches. Moreover, she was also the leading scorer for the United States U-17 team at the 2010 CONCACAF U-17 Women’s Championship.

Lindsey was born on May 26, 1994, in Golden, Colorado, United States. Talking about her early life, she is the daughter of Mark and Linda. She is American by nationality and her ethnicity is Caucasian.

Moving towards her education, she joined Golden High School. However, she didn’t play for the college and joined Colorado Rush.

Despite being named to the Parade Magazine High School All-American team, Lindsey didn’t play high school soccer. During her college, she also got a scholarship to play for North Carolina but she signed with the French club, Paris Saint-Germain.

Lindsey began her soccer career from her college in which she played for the Colorado Rush. During the 2012 season with the Colorado Rush, she scored two goals in three matches. In July 2012, she signed with the French giants Paris Saint Germain (PSG). During her spell at PSG, the American soccer player netted 46 goals in 58 games.

Later on January 4, 2016, PSG terminated her contract to allow her to return to the United States. Furthermore, she joined Portland Thorns FC on January 13, 2016. Moreover, she has been playing as a central midfielder for Portland along with her teammate Adrianna Franch.

Talking about her international career, she was also the leading scorer for the United States U-17 team at the 2010 CONCACAF U-17 Women’s Championship. Prior to joining the senior team, Lindsey represented the U20 national team and netted 26 goals in 24 matches. On March 8, 2013, she earned her first senior cap during a group stage match against China.

In a match against Trinidad & Tobago in December 2015, she scored her debut goal and also won the ‘Woman of the Match’. Currently, she is playing her best for the national side along with other teammates Abby Dahlkemper, Alex Morgan, Julie Ertz, and few others.

Being a soccer star, she earns a healthy amount of money from her profession. Although, her net worth and salary are unknown.

As of now, she has not won any awards. However, Lindsey was the leading scorer for the United States U-17 team at the 2010 CONCACAF U-17 Women’s Championship.

So far, there are not any drastic rumors regarding her personal and professional life. Furthermore, she has never faced any controversy in her career. It seems she has total focus on her work rather than being stuck in any controversy.

How tall is Lindsey Horan?

Lindsey Horan has a height of 5 ft 9 inches and weighs 76 kg. Furthermore, she has a beautiful pair of blue eyes and blonde hair. Besides this, there is not any information regarding her other body measurements.

Lindsey Horan is pretty active on social media. She regularly posts photos and videos on her social accounts. Currently, she has more than 215k followers on Instagram and almost 103k followers on Twitter. Her Facebook followers are around 14.1k.

Also, read the affair, salary, the net worth, controversy, and the bio of Stephen A. Smith, Kyle Brandt, Kay Adams.