Lindsey Shaw is an actress of 10 Things I Hate About You. 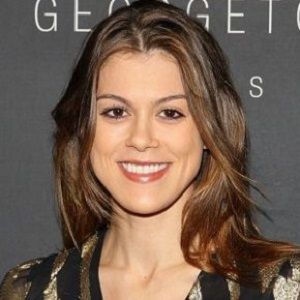 I am involved in Greenpeace. And I just recently completely switched my diet over to near-veganism. So you try to do little things that you can. I recycle every single day. Every single thing in my house that can be recycled is.

I just wanna give a big shout out to all the fans out there who have followed my work up until now. You guys are amazing!! Hearing from fans is the best feeling in the world.

Everywhere you look, there is a charity or a project in school to get involved in. In eighth grade, there was this program called CJSF, California Junior Scholarship Foundation. We were involved in soup kitchens and toy drives, and your school can set up something like that. If your school doesn't have a program like that, set one up.

Lindsey Shaw is an unmarried woman. Back in 2001, she was in a relationship with an American actor Devon Graye. As a loving couple, they carried on their love life for almost eight years.

However, they couldn’t handle their relationship further and split up in 2009. Furthermore, she began dating Ethan Peck in 2009.

The lovebirds spent almost one year and broke up after being unable to continue their relationship. Currently, she is possibly single.

Who is Lindsey Shaw?

Lindsey Shaw is an actress from America. She is famous for being the lead actor in ABC Family’s 2009 comedy series 10 Things I Hate About You.

Lindsey was born on May 10, 1989, in Lincoln, Nebraska, United States. Her ethnicity is Caucasian.

She grew up in her hometown along with her father and mother. Talking about her early life and childhood, there is not much information regarding it.

She acted in the series until the show closed in the year 2007. Soon after that, she appeared in Aliens in America.

However, the show closed just after one year. In 2009, Lindsey featured in a show named 10 Things I Hate About You as Kat Stratford. Furthermore, she has also starred in Nickelback’s music video named ‘Rockstar‘.

Later, in 2011, she portrayed the role of Paige McCullers on Pretty Little Liars. The series lasted for six years and closed in 2017.

Additionally, she has also starred in a couple of TV series which include Faking It, Secret Summer, Body of Proof, and a few more.

Besides this, she has also acted in several movies such as The Great Lie, 16-Love, Love Me, and much more. In 2015, she landed the role of Alice in the movie Objects in the Rearview.

Additionally, she has also featured in Yellow Day and Temps in 2015 and 2016 respectively.

Being a famous actress and model, Lindsey bags a handsome amount of money from her career. Currently, she has a net worth of $3 million.

So far, she has not won any awards or honors. However, Lindsey was nominated for the TV Guide Awards in 2009 for 10 Things I Hate About You.

Moreover, she has never been the topic of controversy to date. Back in March 2016, Lindsey faced criticism after saying that she is a Donald Trump supporter.

Some of her fans also criticize her for stating this. Apart from that, there are not any drastic rumors regarding her personal and professional life.

Beautiful and stunning Lindsey Shaw has a height of 5 ft 8 inches and weighs 60kg.

On screen Lesbian actor, Lindsey Shaw dating a boyfriend or a girlfriend?