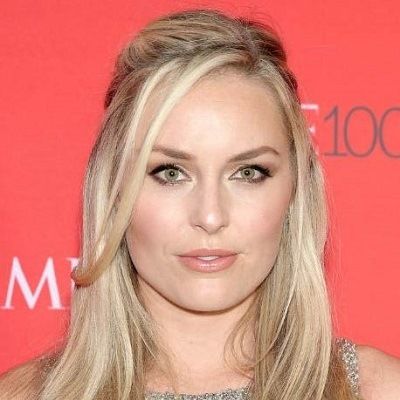 Follow your dreams. If you have a goal, and you want to achieve it, then work hard and do everything you can to get there, and one day it will come true.

If you go around being afraid, you're never going to enjoy life. You have only one chance, so you've got to have fun.

If you go around being afraid, you're never going to enjoy life. You have only one chance, so you've got to have fun.

Lindsey Vonn met fellow alpine ski racer Thomas Vonn for the first time when she was a 16-year-old budding skier and Thomas was a 25-year-old Olympian. After starting a relationship with Thomas, in the run-up to 2006 Turin Olympics, Lindsey even fell out with his father who disapproved of their nine-year-old age gap.

They got married on September 2007 at a Silver Lake Lodge in Utah. During their time together, Thomas took over managing duties and used to arrange her press events and look after logistics, which helped Lindsey concentrate completely on her game. However, Lindsey decided to separate in 2011 as she was feeling miserable and struggling with the mental stress of married life. Their divorce got finalized in January 2013.

Lindsey dated with actor Alexander Ludwig in 2016. In July 2016, she had an encounter with American Football player J. J. Watt when they were found canoodling after the ESPY awards. By the end of 2016, Lindsey was reported to be dating LA Rams assistant wide receivers coach Kenan Smith. On Thanksgiving Eve, she took to Instagram to praise her amazing boyfriend.

Who is Lindsey Vonn?

Lindsey is a former American World Cup alpine ski racer on the US Ski Team. Likely, she won four World Cup overall championships—one of only two female skiers to do so, along with Annemarie Moser-Pröll—with three consecutive titles in 2008, 2009, and 2010, plus another in 2012. Additionally, Vonn won the gold medal in downhill at the 2010 Winter Olympics, the first one for an American woman.

Lindsey Vonn was born in St. Paul, Minnesota, the United States on October 18, 1984. Her birth name is Lindsey Caroline Vonn and she is currently 34 years old. Her father’s name is Alan Lee Kildow (junior national ski champion) and her mother’s name is Linda Anne.

Talking about Lindsey’s education history, she attended the University of Missouri High School, an online program through the university’s Center for Distance and Independent Study.

Talking about her profession, by the time Lindsey was 7, she had already skied in Colorado, Minnesota, and Oregon all-year-round. Similarly, she traveled to Colorado by train for several years to receive skiing lessons at the ‘Ski Club Vail’ (SCV), an alpine racing program that trains young and aspiring skiers of age 6 and above. In the year 1995, at the age of 10, she met ‘Olympic’ gold medalist ski racer Picabo Street at a promotional event.

During her first year at ‘SCV,’ she skied under the ‘Gravity Corps’ pre-age-class program. She was trained by female coach Colby S Scudder. The program, directed by Tom Krebs, had strict guidelines, according to which skiers were not to be trained inside the gates but were to develop their skills in challenging terrain and difficult conditions. Consisting of multiple groups, this program was for skiers who were not old enough to participate in official age-class events sanctioned by ‘USSA’ or ‘FIS.’

Considering Lindsey’s skiing speed, her coach, Scudder, supported the idea of her skiing with age-class skiers. Support from the program director, Chip Woods, made her enrollment for the age-class skiing program possible. She received lessons from technical skiing coaches such as Todd A Rash, Reid Phillips, and Gus Pernetz. They helped her perfect her technical skills and she began the “in gate” training.

In the year 1999, Will McDonald and Lindsey were the first American athletes to win the “Cadets” slalom events in Italy’s Trofeo Topolino di Sci Alpino. Street loved watching the 15-year-old Lindsey perform. She admired her love for speed and her amazing knack for following the fall line, which is a rare find. Climbing through various ranks of the US ski team in her career, she made her ‘World Cup’ debut at the age of 16, on November 18, 2000, in Park City, Utah.

Besides that, she also secured the ninth position in super-G. However, she failed to finish the giant slalom. She also won the ‘US Alpine Championships’ combined title (downhill and slalom) in 2008. At the 2009 ‘World Championships’ held in Val-d’Isere, France, Lindsey also became the first woman to win the world super-G title. In the super combined event, she won the downhill round and almost finished second with a remarkable slalom performance. However, she was later disqualified for splitting a gate.

However, in October 2018, ahead of the 2018–209 ‘FIS Alpine Ski World Cup,’ she announced that she would retire at the end of the season, irrespective of whether she was able to break Stenmark’s record or not.

Talking about her awards, a nomination she won Best Female Athlete ESPY Award.

Talking about her salary, net worth there isn’t any information about her salary and net worth. Lindsey has done promotional campaigns for the sportswear giant Under Armour, chocolate brand Reese’s, Vail town’s tourism (which carried the tagline, Like nothing on earth).

There was a rumor that Lindsey dated Tiger Woods started to swirl around by the end of 2012. They had got in touch after meeting at a charity event in 2012. When Lindsey suffered double ligament tear in her knee during the Alpine Ski World Championships, Woods sent his private jet to fly her back to the US.

Lindsey has a height of 5 feet 10 inches and she weighs is 64Kg. Additionally, she has a measurement of 34-26-35 inches. Lindsey’s hair color is blonde and her eyes color is hazel. Furthermore, her dress size is 2 (US) and her shoe size is 9 (US).