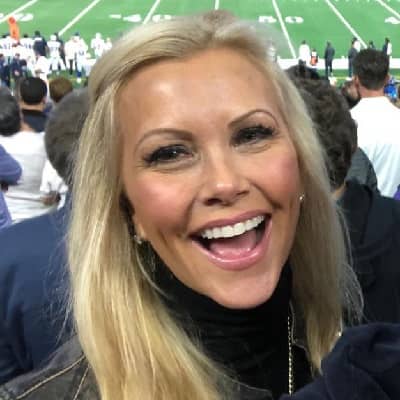 Lisa Dergan is a divorced woman. She is previously married to Scott Podsednik, a former professional baseball outfielder. Their marriage was held on February 4, 2006. Also, the couple has two children a son and a daughter.

However, after eleven years of marriage, the couple decided to part away and separated in the spring of 2017. Before Scott, Dergan dated the filmmaker Michael Bay for almost 10 years.

Lisa Dergan is an American model, actress, media personality, and sportscaster. She is also a former Playmate model for the popular American magazine Playboy.

Lisa was born on August 10, 1970, in Corpus Christi, Texas, the USA. Her full name is Lisa Eileen Dergan. Her nationality is American and belongs to the Caucasian ethnicity.

The name of Lisa’s parents is Robert Leigh Dergan and Carol Ann Dergan. She earned a degree in Art History from San Diego State University. While studying in college, she signed a minor job with the local modeling scout.

Lisa initially was an interior decorator for Chili’s Restaurants before Playboy. She has modeled for the magazine’s ad called What Sort of Man Reads Playboy. In 1998, she was Playboy’s Playmate of the Month in July. She appeared in Raymond Benson’s 1999 “James Bond” short story “Midsummer Night’s Doon”. She appeared in the film The Arena alongside fellow Playmate Karen McDougal in 2001. In 2003, she come up as the St. Pauli Girl spokesmodel.

Lisa made her career big break in the year 2001 when she was hired to work a weekend sports show KCBS in Los Angeles alongside Jim Hill. Afterward, she joined Fox Sports Net in 2002 where she interviewed several famous sports stars such as Tiger Woods, Chuck Liddell, and John Elway.

She co-hosted series such as the USA Network’s game show Smush with Ken Ober and the wedding reality competition series Race to the Altar.

Lisa has managed to maintain a clean profile to date. She stays miles away from such controversial acts that create a huge buzz in the media so, she hasn’t been part of any rumors and scandals.

As a model, Lisa has a well-maintained body physique with an impressive height. She stands at the height of 5 feet 8.5 inches tall and her weight is about 54 kg. Her bust, waist, and hips sizes are 34C, 24, and 34 inches.

Likewise, she has blonde hair color with grey pair of eyes. She has dimples.