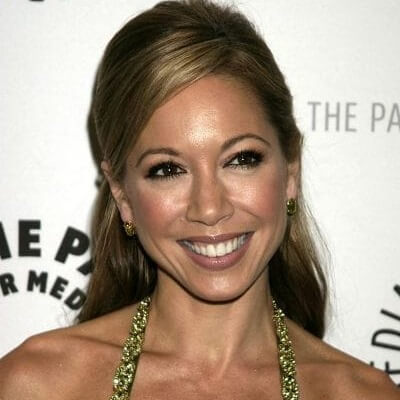 Lisa Joyner is a married woman. She is married to American actor, Jon Cryer. They exchanged wedding vows on 16th June 2007. Cryer in well-known for portraying the character of Alan in ‘Two and a Half Men’. In 2011, he received a star on the Hollywood Walk of Fame for TV.

The couple started dating sometime after Cryer’s divorce with Sarah Trigger. They announced their engagement on The Tonight Show with Jay Leno on 23rd January 2007.

On 11th August 2009, the couple adopted a baby girl and named her Daisy Cryer. Since then, they have been raising her as their own. Cryer also has a son named Charlie Austin from his marriage with Sarah Trigger.

The family lives happily in Los Angeles as of 2020.

Who is Lisa Joyner?

Lisa Joyner is an American host, actress, and entertainment reporter. She is well-known as the co-host of TLC’s Long Lost Family alongside Chris Jacobs.

Joyner was adopted when she was just three months old and had a ‘great childhood’. Hence, the information on her biological parents is unknown. However, she always wanted to know her real parents and her ethnicity. Also, she wanted to know if her parents were alright.

She started looking after her parents and when she was on Fox, one of her viewers helped her find her biological parents. Her parents were living in San Diego. She also found out that she had a half-sister.

Her ethnicity is Mixed(Caucasian, Asian).

There is no information about her education. She is a well-educated woman and studied journalism in her career and probably has a degree in journalism. However, she has not confirmed this so far.

Lisa first started as a food server. After that, she became a pastry chef. Following that, she even worked as an animal acupuncturist before becoming a sports intern for KNBC-TV in L.A.

After some time, she worked for KCBS-TV and KTTV-TV. Moreover, she hosted ‘InFANity’ for the TV Guide Network

She also hosted ‘Find My Family’ alongside Tim Green. The TV show helped adopted children like herself a chance to reunite with their biological parents. In 2016, she started hosting ‘Long Lost Family‘ on TLC alongside Chris Jacobs. She revealed in an interview that she found the journey very empowering and wanted other people to understand it.

Lisa is also an actress. She made her debut in 1998 with a minor role in ‘Brimstone’, a TV series. Following that, she made an appearance in the movie, ‘America’s Sweetheart’. Furthermore, she has also featured in ‘The Bold and the Beautiful’, ‘I See You.com’, and ‘Next’.

Lisa Joyner has an estimated net worth of around $14 million. Also, she has an annual salary of around $600k according to some notable online sites. She is a well-known and well-reputed journalist in America and is also one of the best paid.

There are no rumors about her. Similarly, she has not been involved in controversies. She is a well-respected journalist and is looked upon by many. She is an inspiration to many young women and has been inspiring people from her work over the years.

Joyner stands at a height of around 5 feet 6 inches and weighs around 60 kg. Her body measurements for breasts, waist, and hips are 37-25-36 inches. She has an attractive body shape. Her eye color is brown and her hair color is blonde.

You may also like to read the Bio, Career, Body Measurements, Net Worth, Relationships, Social Media, and more about Maddie Brush, Kathryn Dennis, Seth Doane, and more.