Lisa Rinna is an Actress and Television Host who was in “Days of Our Lives” and “Melrose Place”.

Lisa Rinna married actor husband “Harry Hamlin” on March 29, 1997, and together they appeared in numerous television and film productions. Their daughters, Deliah Belle and Amelia Gray were born on June 10, 1998, and June 13, 2001, respectively.

No news about any kind of marital problems seems to surface about the couple anywhere and they seem to be doing well in their lives. Lisa, though having to care for her children along with handling career still remains as charming as ever and continues to grace the TV with her occasional appearances on screen. 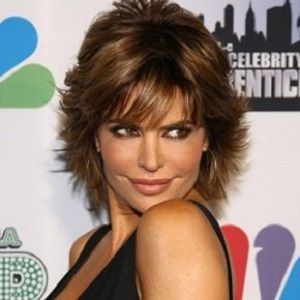 I have two children, and they know that I never pass up a piece of cake, ever

I love my shoulders

I want to live the next chapter in my life without my lips as my defining characteristic.

Who is Lisa Rinna?

Lisa Rinna is an American Actress and Television Host. She is best known for her roles in “Days of Our Lives” and “Melrose Place” and for appearing on TV’s Dancing with the Stars.

Lisa Rinna was born as “Lisa De Anne Rinna” on July 11, 1963, in Medford, Oregon USA. As of 2021, she is 58 years old. Her nationality is American and her ethnicity is mixed(Italian, Portuguese, and English).

She was born to parents Lois(mother) and Frank Rinna(father). Lisa grew up in Melford, Oregon after her family moved to follow her father’s career. She has a sister, Nancy Rinna.

Lisa also attended “Hendrik Junior High School” and  “Mid-High School” in Medford, Oregon. Her childhood activities included being a member of the “Brownies”. She started cheerleading from Junior High Through High School.

she is also known for the skinniest legs in high school on the cheerleading squad. She also loves sports including tennis and snow skiing.

Lisa Rinna started her acting career started when she was 22 i.e. in 1985 when she appeared in the video “Naughty Naughty” by John Parr, as the passenger in his car. Her next appearances included the role of Jason Bateman’s character’s girlfriend in many episodes of The Hogan Family in 1990.

She then starred as Billie Reed in NBC’s Days of our lives from 1996. Rinna’s Lifetime Movie Another Woman’s Husband grossed one of the highest ratings for a lifetime movie.

Lisa’s other acting credits include the teen crime drama Veronica Mars and the Lifetime movie Sex, Lies and Obsession alongside her husband was a guest role on an episode of Movie Stars for the WB. She has also appeared Francesca in Hannah Montana and her first role in a feature film was alongside stars like Charlie Sheen and Jon Lovitz on Good Advice.

She also appeared in an episode of HBO’s Entourage and in February 2009, in the Broadway production of Chicago as Roxie Hard alongside her husband. Nickelodeon’s Big Time Rush also starred her role in the role of Brooke Diamond in2011 and she also expressed her desire to return back to her role of Taylor McBride on CW’s revival of Melrose Place.

At the end of 2011 however, she reprised the role of Billie Reed on Days of our Lives, and her first scenes aired on March 9, 2012. By August, she left the soap to develop a talk show.

She modeled an adult incontinence brief, to benefit the charity Dress for Success under a tight-fitting gown in 2012.  Still a fan of fashionable clothing, she now owns a Belle Gray clothing boutique in Sherman Oaks, California.

Lisa Rinna: Salary and Net Worth

Lisa Rinna has a Net worth estimated to be 10 Million dollars as of 2022.

Real Housewives of Beverly Hills newbie Lisa Rinna is already making shockwaves with her over-the-top behavior on the show. But a recent brawl when she allegedly attacked Kim Richards at an L.A. nightclub.

According to an inside source, Rinna flipped out when Kim accused her husband, Harry Hamlin, of cheating. Kim made rumors for a while that Lisa Rinna’s husband, Harry had been unfaithful’.there are things that are just off-limits as far as Lisa is concerned, and Harry is on that list.