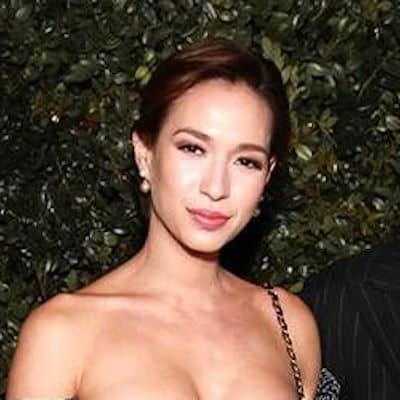 I don’t believe in making sacrifices to be healthy. I believe in making healthier life choices – those things that make me feel great! Those choices are at the core of my values on how I treat myself and others. Fitness balances my physical, mental and emotional well-being so I can live my truth daily and love my life in the process. Each and every day is healthy day

I didn’t know how or why, but yoga made me feel differently. It made me work on those very things I was trying to avoid: My true feelings

what I like and dislike. I started small, first dedicating hours, days, and then years to practice

connecting to those feelings without a promise of results or change. Finding it was a full-contact sport, a trial-and-error process.

Liv Lo is currently in a married relationship. She exchanged vows with an actor of Crazy Rich Asians Henry Golding on 20 Aug 2016.

They met each other in 2011’s New Year’s Eve party and started to date shortly. He proposed to her while holidaying in Phuket, Thailand.

Their wedding was lavish with an Iban-style wedding and was held in Kuching, Malaysia.

In Nov 2020, her husband announced that they will soon welcome their first child.

Interestingly, this couple knows the gender of their kid but they are keeping it under the rug. Liv is exhilarated by her pregnancy and continuously posts pictures on her social account.

Who is Liv Lo?

Liv Lo is a Taiwanese actress and fitness instructor. She is also a TV star and is known for appearing in Point of Entry (2010) and Extra with Billy Bush (1994).

She was born on 21 May 1985 in Taichung City, Taiwan. The name of her father is Richard Lo but her mother is not disclosed.

Liv’s ancestry is Asian and has a sister named Leeza Pazkowski.

Talking about her academics, she attended Temple University Japan. From here, she achieved her mass communications degree.

Liv Lo when she was a teenager, she started her modeling career. Her appearance on Asia’s Next Top Model made her recognizable in the entertainment industry.

As of now, she is an actress and a fitness instructor. She has a certificate for teaching yoga classes. Her brief role as Sophie Thomas in an episode of the TV show Point of Entry is loved by her fans.

Liv is also a host and hosted several shows like shows on Xing Kong, Fox Sports Asia, and Star World Asia. She also has her own app FitSphere where she guides people towards healthy living.

She also gives fitness ideas and views on NEOU and Tonal.

At present, her net worth is estimated at around $100k US. But her salary from her career is not yet revealed.

This fitness guru is keeping herself away from rumors plus scandals at present.

Regarding Liv Lo’s body features, her height is 5 ft 8 inches and her body weight is 54 kg. She has dark brown eyes and her hair has natural black color.

Liv is officially active on social networking sites including Facebook with over 9k followers. She has more than 5.2k followers on Twitter.

Also, her Instagram account is followed by more than 236 people. She posts her amazing pictures along with her loved ones on this platform.

In addition, she also runs a YouTube channel that has more than 4.74k subscribers.