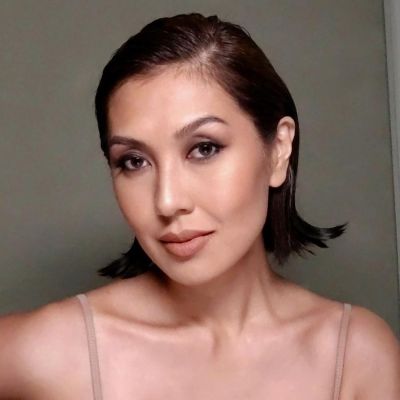 Who is the husband of Liz Uy?

Liz Uy is in a happily wedded relationship with her spouse, Raymond Racaza who is a businessman.

After the two months of engagement, she revealed that Racaza is already her husband. It seems like they did a low-key wedding after which there is no info on the precise date of their wedding.

On Wednesday, October 20, 2021, the pair celebrated their first anniversary as a married couple.

Prior to this, on October 27, 2020, she confirmed her engagement by posting an Instagram photo of her wearing an oversized polka-dotted suit, which made her engagement ring very noticeable.

On September 20, 2017, Liz gave birth to their son, Xavibao, in the United States. However, it was only in March 2018 that she introduced their baby boy to the public.

Similarly, On Wednesday, March 3, 2021, the famous style editorial manager, announced the birth of her youngest child, a baby named Matias.

The celebrity stylist confirmed her pregnancy in December 2020, a few months after she said that they were already engaged to be married.

Rayver Cruz:-Back in 2013, the actor and dancer who is younger than her was rumored to be her boyfriend. However, calling her ‘Ate Liz’, the actor disagreed about their affair in the past.

Lino Cayetano:- Liz and Cayetano were reserved about their relationship before but there were reports they were spotted on several occasions together and even on normal days just strolling in malls. Currently, he is married to volleyball player Fille Cainglet.

Former President Benigno Aquino III:- There were loud rumors before that the stylist had a short-lived romance with the former president. Later, he mentioned that they were actually seeing each other if their schedules would permit.

John Lloyd Cruz:- To recall, they broke up in 2009 and this is one of the publicized love relationships of the stylist.

Ely Buendia:- The local rock icon was once linked to her which Uy denied. It all began after he attended her party and many people then have expressed malicious ideas regarding it.

Atom Araullo:- There were rumors before that she was wooing the broadcaster. The rumor has it that she once sent a cake for him but the present from her got ended up eaten by his staff because of lactose intolerant.

Who is Liz Uy?

She rose to prominence after being the chief editor of Preview Magazine. Her unique sense of fashion and creativity has stolen the attention of fans as well as the media.

The Fashion stylist was born in Manila, the Philippines on February 8, 1982. As of 2022, Liz Uy is 40 years old holding Filipino citizenship. She maintains Asian ethnicity while her star sign is Aquarius.

The talented lady was born to her mother, Nenette Uy while the name of her father is still unknown. Similarly, she has one brother named, Vince Uy and a sister named, Laureen Uy.

Talking about her educational background, she did her schooling at Grace Christian High School, a Chinese school in Manila, Philippines. After schooling, she joined the De La Salle-College of Saint Benilde where she earned a degree in Hotel Restaurant and Institution Management.

The fashionista has worked with top magazines like Preview Magazine and Esquire Philippines and even serves as a digital curator for Style: Singapore. Similarly, she is the founder of StyLIZed Studio. She is one of the talented and trusted stylists working for the most important names in Philippine show business, sports, and politics for years.

The 40-year-old Filipino business visionary was featured on the cover of Preview Magazine from January–to February 2011. Following year, she was enlisted in the Town & Country Philippines’ list of 101 People You Must Meet.

Uy has an endorsement with many known brands like Cream Silk, Sony, RCBC, Blackberry, Globe, Cathay Pacific, and Magnum ice cream. Likewise, the fashion star is the brand ambassador for Kiehl’s, Samsung, and TRESemmé.

As an author and editor, she released her book, StyLIZed: Liz Uy’s Ten Style Essentials. The book provides the info on how to make a fashionable and highly functional wardrobe.

For the book, she was enlisted as National Bookstore’s Best Selling Author in 2014. Her book has made an impressive number of selling in the Philippines. With her hard work and talent, she has been awarded honorable Awards like,

Contrasting with 2022 the net worth of a Filipino fashion designer is estimated to be around $5 million.

As we all know, Fans are always keen to know about the rumors and buzzes related to celebrities.

However, Liz Uy has managed to keep herself out of untrue rumors and controversies to keep her career safe.

Liz Uy has a provocative figure. She has a thrilling yet thin body type which she maintains by doing various physical exercises in the wellness place.

The famous lady weighs around 60 kilograms standing at the height of 5 feet 6 inches (167 centimeters).

In addition,  She has not inked any tattoos on her body.

Moreover, she has a pair of black eyes and brown hair. Her body measurements are not available at the moment.

Also, there is a Facebook page, under her name, having around 116K followers.

Adding more, there is an unverified Tiktok account, under her name, which is enriched with over 2.8K followers.