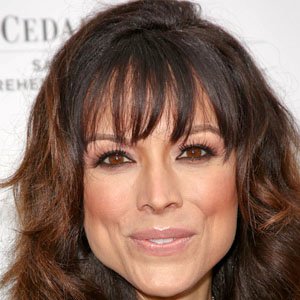 There is no such thing as low maintenance or high maintenance, just a bunch of women hoping for a capable mechanic.

My biggest turn-on has to be brains, intelligence.

Notice the small things. The rewards are inversely proportional.

Liz Vassey is a married woman. She has been married to Davis Emmerichs since May 2, 2004. The couple has not welcomed any child yet and they are spending quality time with each other. Also, there is no sign of divorce between the couple.

Who is Liz Vassey?

She was born on August 9, 1972, in Raleigh, North Carolina, USA. Her birth name is Elizabeth Vassey and she is currently 46 years old. She has not disclosed information regarding her parents, childhood, and siblings. She spent the first two years of her life in Raleigh before her family shifted to Tampa, Florida.

Liz holds American citizenship but her ethnicity is unknown.

She attended the University of South Florida, Tampa, Florida, USA.

Likewise, Liz Vassey has portrayed the recurring role on ‘CSI: Crime Investigation’ as Wendy Simms from 2005 to 2010. Then, she was promoted to a regular cast member from starting of the tenth season but she did not return for the show’s eleventh season.

In addition, she has a cameo as Fury Leika on Joss Whedon’s web-based musical, ‘Dr. horrible’s Sing-Along Blog’. Also, she started a company named Neurosis to a T(ee) along with fellow actress Kristin Bauer. The company designs and sells slogan-covered T-shirts for women.

She likes to be very secretive and she has been successful in maintaining her personal and professional life far from rumors and controversies.

Brenda Vaccaro
Tags : All My Children American Actress The Tick