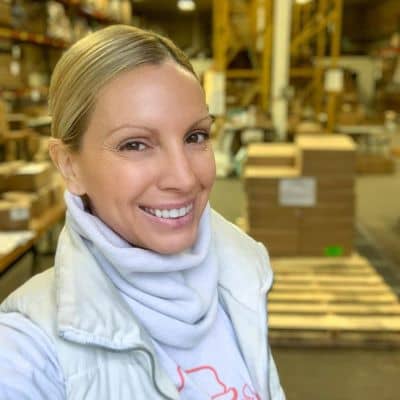 Liza Huber is happily living a married relationship with Alexander George Hesterberg. Alex is Chief Customer Officer at Turbonomic, the leader in workload automation for hybrid cloud. The couple first met in first grade and ultimately married on 13 March 2004.

Their family extended as Liza gave birth to her third baby, named Hayden Victoria on 23 March 2011. And lastly, They welcomed their fourth kid, Mason Alexander Hesterberg on 6 February 2013. Presently, they reside in Wayland, Massachusetts, the USA.

Who is Liza Huber?

Moreover, she is also the founder and CEO of a company, Sage Spoonfuls, which provides homemade quality baby food products.

Liza Huber was born on 22 February 1975. At present, her age is 46 years old. Likewise, her birthplace is Long Island, New York, the USA.

Romi is the daughter of her father, Helmut Huber whereas her mother is Susan Lucci. Moreover, she has a brother, Andreas Huber.

Talking about her nationality, Huber holds an American identity whereas her ethnicity is mixed(Italian, Swedish, German, Austrian, and French).

Regarding education, the actress achieved her undergraduate degree with a specialty in Communications with Film Production from the University of North California at Chapel Hill.

Professionally, Liza Huber emerged with her mother in a 1993 Ford Motor Company advertisement. She made her debut in television in an uncredited role in Lifetime’s original movie, Ebbie (1995). Further, she was declared as a cast member in the NBC daytime soap opera, Passions. Having said this, Huber left the show in the year 2000.

Liza left the show with an aim to return to New York and be near her fiance at the time. The talented actress was named Miss Golden Globe in 2000, an honor the Golden Globe Awards show gives each year to the daughter of a celebrity.

Later, Huber was offered to return to Passions in 2002, when her replacement star, Natalie Zea decided to quit the role of Gwen as her contract ended. Moreover, she featured and co-produced the play Four Dogs and a Bone at the Harold Clurman Theater in New York City. Also, she emerged on the game show Hollywood Squares in October 2003. The actress resigned from acting in 2008.

Presently, Liza is the founder as well as CEO of her company, Sage Spoonfuls. In one interview, Liza mentioned that it is one of the hardest jobs in the organization. Sage produces a robust product line focused on healthy cooking for babies and toddlers and families.

Multi-faceted actress, Huber has earned handsome money from her profession. From her career in the acting and the movie industry, she lives a luxurious lifestyle. She has been active in her profession from 1995 till 2008.

However, the entrepreneur has not disclosed her exact salary, earnings, and assets details till now.

Famous star, Huber has never been part of any controversial matter or rumors till now.

It seems that she favors living her personal life peacefully and does not want to merge it with her professional life.

46 years old star, Liza Huber has gorgeous looks as well as a charming personality. She stands at a height of 5 feet 8 inches. Also, she has a balanced body weight of 48 kg.

Furthermore, Huber has brown eyes whereas her hair is blonde.

Regarding her social media presence, Liza Huber is an active personality on social media. -Liza has more than 14.1k followers on her official Instagram account @lizahuber.

She is also active on Twitter with around 2.2k followers.