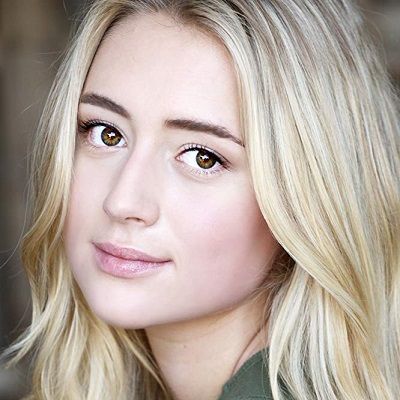 Lizze Broadway is currently in a relationship with Tanner Buchanan. Tanner is an American actor who has appeared in several movies and TV series.

Who is Lizze Broadway?

Lizze Broadway is a TV actress. She is known for working as an International model and competing in the talent competition.

She is going to appear as Alli in the pre-production Stranger Times.

Her father is a high school director. Similarly, she moved to Los Angeles with her mother and sister to pursue acting.

Lizze was interested in acting from a young age. She launched her career in entertainment after succeeding in the International Model and Talent competition. Similarly, Lizze has worked in several commercials, voice-overs and now embraces television opportunities.

In 2010, Lizze appeared in the TV series Southland as Brooks Ryerson. After that, in 2011, she appeared as Daughter in TV series Shameless and Rose in movie Bad Mom.

Similarly, she played Kat Matin in 2013 Bones, Steph in Conan, Maya in Trophy Wife, Abbey in 16 and Missing and A Killer Walks Amongst Us. Similarly, Lizze worked in other TV series NCIS: Naval Criminal Investigation Service as Mandy, Here and Now as Becca Koats, Henry Danger as Heather and others.

Her recent works include in Splitting Up Together, The Rookie, Slay, American Pie Presents Girls’ Rules and others.

She has a YouTube channel named Lizze & Tanner. She has uploaded only one video till date. Her video was uploaded on 27th July 2019 with title Comic Con 2019 with Cobra Kai Cast- Behind The Scenes.

Lizze has not been part of any rumor and controversy yet. She likes to keep her life away from the media.

Lizze has brown eyes and blonde hair. She is 5 feet 1 inch tall.

Lizze has around 24.1k followers on Instagram. She is following personalities like Natalie Portman, Elayna Carausu, Lauren Patten, Tyler Posey, Victoria Lee, Ashley Benson, and others.