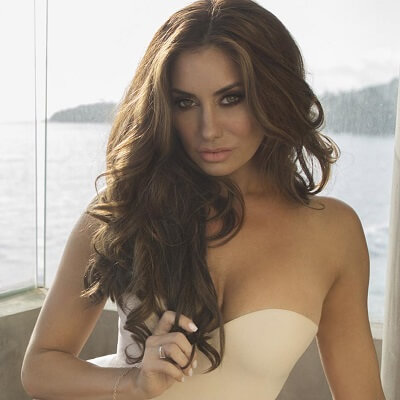 Lizzie Rovsek is currently single. She was previously married to Christian Rovsek. Her ex-husband is a successful businessperson and real estate investor. The couple dated for several years before deciding to get married. They exchanged wedding vows on 12 September 2009. From their marriage, Lizzie gave birth to two children. She gave birth to their eldest son, Preston in 2011. After about a year, she gave birth to their second son, Kingston in 2012.

Unfortunately, the couple decided to get divorced. The reason for the divorce was their irreconcilable difference. They filed for divorce in October 2018.

The divorce was settled after Christian agreed to pay $10k per month for spousal and child support.

Lizzie Rovsek is an American TV personality, model, fashion designer, and host. She came into the limelight with her appearance in the reality series, ‘The Real Housewives of Orange County.’

Lizzie Rovsek was born as Elizabeth Ann Arnold on January 22, 1980, in Lexington, Kentucky, USA. As of 2020, her age is 40. She was born to parents, Margret Angela Arnold(mother) and Benjamin A. Arnold(father). She has not revealed anything about her siblings if she does have any.

Rovsek spent her childhood days in Lexington and was always interested in modeling and the entertainment world, in general. Her ethnicity is German-English.

Talking about her education, she studied fashion designing at the University of Kentucky.

What is the Net Worth of Lizzie Rovsek?

Lizzie Rovsek has an estimated net worth of around $25 million. She has garnered such a massive sum with her career as a model, fashion designer, and reality TV star. She is a regular cast member of The Real Housewives of Orange County. Also, she settled her divorce with her ex-husband, Christian for $10k per month.

Lizzie started her career as a model. She became the Miss Kentucky USA in 2002. Prior to that, she also won the Miss Kentucky Teen USA in 1998. Besides being a model and a reality TV personality, she is also a host. in 2004, she hosted the NBA All-Star game.

Rovsek started her acting career in 2006. She made her acting debut in the film Stand by Your Man(2006). Following that, she worked in other movies including Cut Off and The Crying Museum.

She got her breakthrough in 2014. She joined the cast of the Bravo reality TV series, The Real Housewives of Orange County.

Rovsek joined the famous cast in the ninth season. She made her first appearance in the fourth episode in Daniele’s ugly sweater party. She also came back for season 10 as a friend of the famous housewives of the show.

Furthermore, she even appeared in season 12 as a guest member. She appeared in the episode, Loose Lips Sink Friendships in which she discussed the rumors regarding Eddie Judge’s sexuality.

Apart from being a model, reality TV personality, and a host, she is also a fashion designer and businesswoman. She owns the swimwear clothing line, Sun Kitten Swimwear.

Similarly, there are no rumors about her.

You may also like to read the Bio, Career, Body Measurements, Net Worth, Social Media, Relationships, and more about Julianne Phillips, Delta Burke, Raquel Leviss, and more.

RHOC’s Shannon Beador decided to have plastic surgery after the divorce with her husband David Beador!