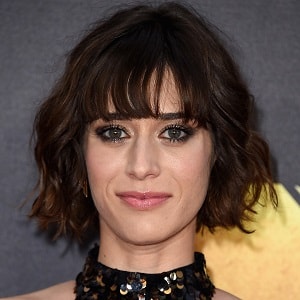 “It's weird, It's really weird to be called a breakout star. And some people are referring to my show as the new 'Friends', which I can't really even wrap my head around.”

Lizzy Caplan was in an affair with actor Matthew Perry. They began dating from 2006 till 2012. She was in connection with the English actor Tom Riley in May 2016.

They met in January 2015 while she was filming in London. They made red carpet debut as a couple at the Prague Opera Ball in February 2016. The duo married on 02 September 2017.

Who is Lizzy Caplan?

Lizzy Caplan is an American actress and model. She became famous after her roles in the films ‘Mean Girls’ in 2004 and ‘Cloverfield’ in 2008.

She was born on June 30, 1982, in Los Angeles, California, USA. Her birth name is Elizabeth Anne Caplan and she is currently 38 years old. She grew up in Miracle Mile District.

Her father’s name is Richard Caplan(lawyer) and her mother’s name is Barbara(political aide). Her siblings are Benjamin and Julie.

When she was 13 years old, her mother died of illness. Lizzy holds American citizenship and her ethnicity is Ashkenazi Jewish.

Lizzy joined Alexander Hamilton High School and was a student at the school’s Academy of Music.

She was also one of her school’s soccer team. She completed her graduation in 2010 but she did not attend college because she wanted to focus on acting.

Lizzy Caplan debuted her acting career in 1999 as Sara from the critically acclaimed series ‘Freaks and Geeks’. She made her guest appearance on numerous shows and appeared in the music video ‘You and I Both’.

Lizzy debuted her acting in the film from ‘From Where I Sit’ in 2010 which was released straight to television. She portrayed the role of Tina Greer in an episode of ‘Smallville’ and reprised her role on the show in 2003. She became more famous for her role as Jains Jan in the 2004 film ‘Mean Girls’.

This actress played the role of Marjee Sorelli in ‘Related’ in 2005 but the show was canceled after one season. She starred as Sara Weller in the thriller film ‘Love is the Drug’ in 2006 and was named one of ’10 Actors to Watch’ by Variety.

Lizzy played as Marlene Diamond in the film ‘Cloverfield’ in 2008, as Ami in the romantic comedy ‘My Best Friend’s Girl, guest-starred as Amy Burley on the HBO vampire show ‘True Blood’, gave the voice of Faith Pitt in the proposed animated version of ‘The Pitts’ in 2007, and appeared in ‘127 Hours’.

She premiered in ‘Save the Date’ and ‘Bachelorette’ in early 2012 at the Sundance Film Festival. She portrayed the role of Julia in several episodes of the Fox sitcom ‘New Girl’ in 2012.

Lizzy portrayed the role of 1960s human sexuality pioneer Virginia E. Johnson on the Showtime series ‘Masters of Sex’ in 2013. She portrayed her own vocals for a cover version of the song ‘You Don’t Know Me’ in the ‘Masters of Sex’ episode ‘Phillic Victories’.

She has collected a net worth of around $4 million from her professional career. But her salary is unknown.

There is a rumor that she along with Sienna Miller, and others will be testing for domino in ‘Deadpool 2’. Another rumor heard is that she is dating her ‘Bachelorette’ co-star James Marsden. But, it is not confirmed.

Lizzy Caplan has a height of 5 ft. 4 inches and she weighs 53 kg. Her body measurement is 34-23-35 inches. Lizzy has got dark brown hair and green eyes.

To know more about Chloe Rose, Samantha Lewes, and Marlyne Barrett, please click on the link.