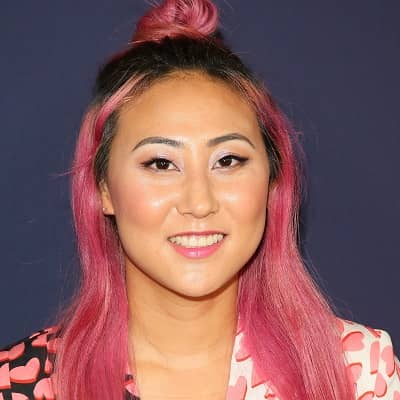 She was said to be dating fellow YouTubers, Ryan Prunty. The two had their first date on the roof of Carter’s home and they chronicled it in a January of 2020 video. Then, Lizzy also posted a video entitled “Meet My New Boyfriend,”.

Later Ryan asserted that their relationship was done just for the cameras. Just a few weeks after their first date, Ryan also posted a video on his channel entitled “We Broke Up… (and my house tour lol).” Later Ryanexlaine that it was a storyline and they weren’t dating in their real life.

Previously, Lizzy was in a long term relationship with Carter Sharer.  The couple first met at orientation for Carnegie Mellon University in 2012.

They started dating when Carter asked Lizzy to be his girlfriend. No sooner they also began creating content together and were featured together in the videos.

However, they ended their relationship in August 2019. Yet still, they seem to be good friends with each other.

Who is Lizzy Capri?

Lizzy Capri is one of the popular names on the internet. She has garnered millions of followers on her social media accounts.

The star has established herself as a popular YouTuber owning three channels.

Lizzy was born on June 17, 1994, in Washington, DC, USA. Later she went to live in San Francisco, California. Her birth name is Elizabeth Chang.

She is of American nationality, and her ethnic background is Korean.

Lizzy studied at the Carnegie Mellon University of Pittsburgh. She has her Bachelor of Science in Statistics and Technical Writing.

And likely, she graduated in the year 2016. And then she also worked at LinkedIn as a Technical Writer as an intern.

In her early days, Lizzy Capri worked as a technical writer and did internal documentation at LinkedIn. She is also a member of Team RAR along with her friends Carter Sharer, Ryan Prunty, and Stove Kitchen.

Lizzy started her main channel ‘Lizzy Sharer’ on September 29, 2017. Her first video was“Pancake Art Challenge With My Boyfriend”. Later, she posted various pranks, reactions, and comedy videos on her channel.

No sooner she gained popularity gaining a million followers and views in her videos. Searching For Stephen Sharer (Haunted) is her most popular video receiving up to 8 million views. Chang’s second YouTube channel “Like Lizzy” was launched on July 26, 2018.

This channel features gaming and reaction videos. She got into gaming when she started playing Fortnite three to four hours every day and was into it. Likely, her third channel, “Lizzy’s Life” was created on July 27, 2018. It also includes different vlogs and videos.

Chang was also featured with Stephen, Carter, and Garcia in a YouTube video titled “Soda Slime with Karina Garcia” in Nov 2017.

The Youtube sensation has her own merchandise which is sold through, stephensharer.com. It contains different custom-made T-shirts, hoodies, and other accessories with various stickers and prints. And the prices of the merchandise ranges from $15-$50.

Similarly, according to sources, she earns $74.8K to $1.2M annually calculating the daily views and growth of subscribers.

Considering her latest posts on her social media, her post has an average engagement rate of around 1.68%. And so, it leads her to earn between $677.25 to $1,128.75 from her sponsorships & promotional posts.

Lastly analyzing her incomes and earnings, her estimated net worth is around $2.5 million.

The star has maintained a distance avoiding anything which could spark rumors and controversies about her in the media.

Lizzy Capri has naturally brown colored hair color but often prefers it to dyes into different colors like red, blonde, and black. Likely, she has a beautiful face with black-colored eyes.

She stands with a height of 5 ft 4 inches and weighs around 55 kg.

Furthermore, She has her own YouTube channel with 5.82M subscribers. Likely, she holds around 3.9M followers and 44.6M likes on her TikTok account.

Her gaming YouTube channel, ‘Like Lizzy’ has 644K subscribers. And she also owns another YouTube channel named, Lizzy’s Life having around 414K subscribers where she prefers to upload Vlogs, Life Hacks, Craft Ideas, and Fun Family-Friendly Experiments.

You may also read the bio of Bryce Parker, Alex Guzman, Cheyenna Clearbrook, and Linus Sebastian.