Lizzy Greene is a TV actress and web star who was on Nicky, Ricky, Dicky & Dawn.

Cute and adorable child actress Lizzy Greene is only 19 years old. She is too young to be in a relationship with someone.

Being so young, she has not been in any relationship till now and it seems like she is sharpening her strength and skills to make her all dreams come true. 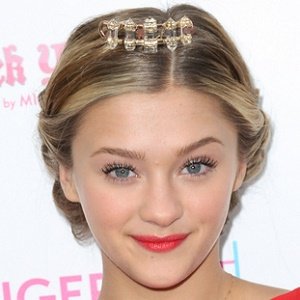 Work hard and follow your dreams. I work nine and a half hours a day, five days a week

it's a lot of hard work and sacrifices, but in the end, it all comes out to be worth it. If you want to get a head-start into the entertainment business, get into a performing arts school or start performing in a theater because that's one of the main places that agents and managers look for talent

When you get into the entertainment business, you have to grow up a lot faster, because you're working nine and a half hours a day. I've learned time management at 14-years-old, and I've learned how to do all these different things that some people don't learn until they're in their 20s and 30s

I love celebrities who aren't afraid to take risks. And in the end, it pays off. Some celebs just have the freshest outfits, and they're always giving us something that we never expected.

Who is Lizzy Greene?

She is best known for playing the series regular role as Dawn Harper on the Nickelodeon show Nicky, Ricky, Dicky & Dawn since 2014. She has been nominated for the Kid’s Choice Awards for her role in the series.

Lizzy Greene was born on May 1, 2003, in Dallas, Texas, USA. Her nationality is American but her ethnicity is North American.

There is no information about her parents. She lives in Dallas with her parents and older brother.

Lizzy was discovered by a Los Angeles talent manager while she was attending John D’Aquino’s Young Actors Intensive in June 2013.

She attended the Fun House Theater and Film School in Plano, Texas.

Lizzy was interested in acting since her early childhood age and she wants to become a full-time professional actress in her career.

Greene began her acting career in 2014 when she has cast the series regular role as Dawn Harper on the Nickelodeon show Nicky, Ricky, Dicky & Dawn.

Since then, she plays the character Dawn Harper in the series. Her performance in the series earned her a Kid’s Choice Awards nomination.

Lizzy has appeared in 84 episodes of the series till now and she has a contract until 2018. She also appeared on Nickelodeon’s Ho Ho Holiday Special in 2015.

Besides acting, Lizzy is a famous social media star. She is very active on Instagram where she posts her pictures with her family and friends. She has over 1.5 million followers on Instagram.

Lizzy Greene: Salary and Net Worth

But there is no information regarding her salary and as of 2022, she has an estimated net worth of $1 million.

It seems she is doing her best job without harming others for which she hasn’t been a part of the controversy yet. She is loved by everyone for her work and adorable looks. Also, she is so young to be a part of rumors and controversies.

She has a good height of 5 feet 2 inches with a bodyweight of 41kg.

She has blonde hair color and her eye color is blue. Her bra size is 28 C, her shoe size is 6 US and her dress size is 4 UK.

Also get to know more about the birth facts, education, career, net worth, rumors, height, and social media of different personalities like Emily Joyce, Ade Edmondson, and Rob Giles.