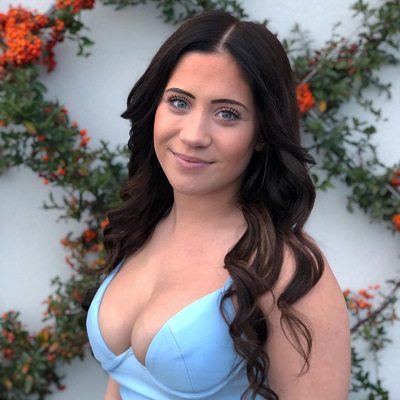 Then in Aug 2019, she revealed that she is pregnant via youtube.

Prior to that, she was in a relationship with the YouTuber, Lance Stewart. She first met with Stewart back in her High School days.

Later, she started dating when she was 14. However, they broke up in 2018. Despite that, they remain close friends after the break up too.

Who is Lizzy Wurst?

Also, she is a YouTuber too.

Lizzy Wurst was born on the 22nd of July 1998 in the United States. She is of Germanic ethnicity.

To date, she has not shared any details of her mother and father.

She has a younger brother who is often featured in her vines.

She started her career as a social media influencer with Instagram back in 2015 posting her prom photographs.

Later, she started posting on a regular basis that includes videos like the pepper eating challenge and her photographs at the beach. Those starting videos and photographs went instant viral giving her fame as an Instagram star.

However, the journey to became an Instagram star was not easy as she faced harsh comments and criticism on her initial post. Despite that, she never gave up and continued posting her content on the app until the day.

After her successful career as an Instagram star, she started her own YouTube channel on the 4th of August 2016. She posted her first video with her then-boyfriend, Lance Stewart.

Later, she started her challenge and prank videos that gripped the attention of many videos making her a rising Youtuber too.

To date, she has uploaded 50 videos with 425.5k followers with 6.4 million likes in the small-time interval of 6 months.

Through her career as a social media star, she has made a net worth of $200k. Her earnings as an Instagram star is in the range of 5 digit figure. Also, she makes through her merch too.

To date, she has managed to remain far from any kind of controversy that created headlines in the media. Similarly, there are no rumors too.

However, back in 2018, she made headlines on social media when she broke up with her long-term boyfriend, and the vine star, Lance Stewart. They made their break up officially through the YouTube video, we broke up on their respective channel. In the video, they explained that their relationship went through a rocky path 6 months before.

Talking about the appearance, she has a photogenic face with an oval-shaped facial structure.

Also, the Instagram star often experiment with her hairstyle from black to blonde hair color with short to long and wavy hairstyles.

She also has a self-titled YouTube channel with around 1.4 million subscribers and over 106.7 million views. Apart from that, she is also active on Snapchat with the ID, lizzywurst123.