Lizzy Yarnold is a former British skeleton racer. She won consecutive Olympic gold medals in 2014 and 2018 and became the most successful Olympic Skeleton athlete of all time and the most successful British Winter Olympian. She is married to James Roche.

Lizzy Yarnold is a married woman. She is married to James Roche. He is a McLaren engineer and co-designer of her sled while working for McLaren Applied Technologies.

The couple first met at the 2014 Sochi Games when James was the sled designer for Team GB.

They exchanged wedding vows on 1 May 2016. She announced that they were expecting a baby with a hilarious post on Instagram on November 29, 2018. On 11 April 2019, she announced she gave birth to a baby girl a few weeks ago. She did not reveal her name and called her ‘H’ in the post. 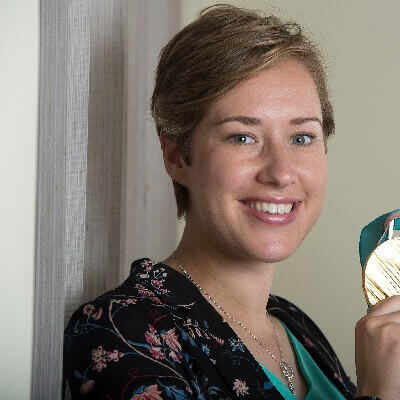 I'd like to say a big thank you to everyone who is helping piece this slightly broken athlete's body back together, now felt like a good time to have it done, I couldn't manage the pain any longer! I'm not feeling great right now but here's hoping recovery will be speedy.

Who is Lizzy Yarnold?

Lizzy Yarnold was born as Elizabeth Anne Yarnold in Sevenoaks, Kent, on 31 October 1988. As of 2020, her age is 31. She was born to parents Clive Yarnold (father) and Judith Yarnold (mother). She is one of her parents’ three children. Yarnold has two sisters named Charlotte, and Katie.

She spent her childhood days in Kent. Her ethnicity is English.

Talking about her educational background, she went to St Michael’s Preparatory School, an independent school in the village of Otford, Kent. Following that, she went to Maidstone Grammar School for Girls in the Kent county town of Maidstone where she had the honor of being the school’s Head Girl.

After undertaking UCAS clearing after her A-Levels, Lizzy joined the University of Gloucestershire to study geography and sport and exercise science.

Lizzy Yarnold began competing in Skeleton in 2010 and won her first official race in the Europa Cup in November. She improved with time and finished the 2011/12 season in 9th position and became a bronze medallist in the senior World Championships in 2012.

She eventually secured the World Cup Championship at the last race of the 2014-14 season and the Olympic gold medal at the Sochi 2014 Winter Olympics by 0.97 seconds. The Olympic performance was amazing as she had the fastest run of each of the four runs. In the 2014 Birthday Honors, her country appointed her as the Member of the Order of the British Empire (MBE).

In 2014/15, Yarnold completed a career grand slam by becoming European Champion in February 2015 and the World Champion the next month. Moreover, she finished as runner-up in that season’s World Cup standings winning 5 World Cup races and tasting defeat by a narrow margin of 20 points. She successfully defended her Olympic title at the 2018 Games in Pyeongchang despite suffering from numerous health problems. On her final run, she set a track record to clinch the gold by half a second.

Lizzy celebrated her triumph two months later with an open-top bus tour in Kent where thousands of fans turned up to give her a hero’s welcome.

In the 2018 Queen’s Birthday Honours List, she was awarded the OBE (Officer of the Order of the British Empire).

Yarnold announced her retirement in October 2018 despite stating in September 2018 that she was planning on returning to training.

Yarnold stands at a height of 5 feet 8 inches and weighs around 70 kg. Her hair color is blonde and she has a pair of beautiful blue eyes.

How much is Lizzy Yarnold’s Net Worth?

Lizzy Yarnold has an estimated net worth of around $1 million as of 2022. There is no information about her salary.

Injuries are a part of sport and Lizzy had a fair share of injuries. In 2017/18, she suffered from dizzy spells for several years and in September 2017, she revealed that she had been diagnosed with a vestibular disorder affecting the inner ear. At the 2018 Games in Pyeongchang, she suffered from a number of health problems. She had developed a chest infection which worsened to the point where she was having trouble breathing and speaking, and on the first day of competition, she suffered from dizziness due to a flare-up of her vestibular condition.

Some weeks after the 2018 Olympics, she underwent knee surgery to remove a tumour in her knee which had been discovered six months prior to the Games. After the use of crutches, her back pain worsened and was diagnosed as the result of a displaced disc, resulting in her being prescribed powerful painkillers for several months afterward. In July 2018, she subsequently underwent a successful operation on her back.

Lizzy has not been involved in any controversies. She has been able to keep herself away from any type of controversy and scandal. So far, she has not done anything controversial in her career. Similarly, there are no rumors about her of any kind.

You may also like to read the Bio, Career, Body Measurements, Net Worth, Social Media, Relationships, and more about Ryne Sanborn, Maggie Haney, Marla Runyan, and more.