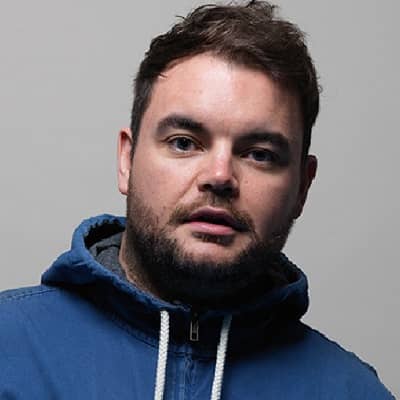 Lloyd’s current relationship status is in a relationship. He is dating Sophia Money Coutts.

Sophia a journalist and an author of the novel, The Plus One. She is also a regular contributor for channels like Channel 4, BBC, Sky News, and CNN.

In June 2018, they were spotted together spending their time in Santa Barbara, California. And their social media handle even reveals them quoting each other as, ‘my other half’ and ‘partner.’

Who is Lloyd Griffith?

Lloyd Griffith is an English comedian and television presenter. He was a presenter on Soccer AM until the end of the 2018-2019 season.

Recently he fronted a show on BBC called ‘Can You Beat The Bookies?’.

The comedian was born on July 5, 1983, in Grimsby, United Kingdom. His father and mother’s name aren’t disclosed.

Lloyd was raised along with her sister named Hannah Griffith. Since a young age, he has been a keen football fan.

He belongs to British nationality and is of Welsh ethnicity.

Talking about his education, he studied music at the University of Exeter. He was also a choral scholar in the Exeter Cathedral Choir.

Lloyd Griffith first debuted on the Television working as a host on the TV show BBC Three series. He used to take interviews on different professional footballers including Troy Deeney, Asmir Begovic, and Dele Alli in their respective training grounds.

Later, he was announced as a new host of Soccer AM; replacing Helen Chamberlain for the 2017-18 run of the show.

Lloyd is also popular for his TV works. He briefly appeared on TV shows and movies like Drunk History, Rugby’s Funniest Moments, In Off The Bar, and The Sweat Small Stuff, 8 Out Of 10 Cats, Bounty Hunters, Comedy Central Live at The Comedy Store, Roast Battle.

His other TV credits include Drunk History, Taxi To Training, Football’s Funniest Moments, The Premier League Show, Songs of Praise, and many more. Recently he fronted a show on BBC called ‘Can You Beat The Bookies?’.

Griffith being a football fan, supports his hometown team Grimsby Town. He has also done commentary on some of their games for BBC Radio Humberside.

Griffith also serves as a host on Flinch, a physical gameshow for Netflix.

Further, he was part of the tour with his new show ‘Not Just A Pretty Face’. He still sings professionally and can be seen singing as a deputy in the choirs of St George’s Chapel Windsor Castle and Westminster Abbey.

Building his career successfully, he must have good earning from it. Yet his net worth is under review.

With his profession as a stand-up comedian, Lloyd earns an annual salary of $30K.

He hasn’t been in an incident that could create any rumors about her. Moreover, this comedian is also not surrounded by any desperate scandals.

Lloyd Griffith stands with a decent height of  5 ft 8 inches and a decent weight. Likely, he has light brown colored hair with beautiful blue pair of eyes.

Furthermore, he has his own YouTube channel with over 61.4K subscribers.