Updated On December 23, 2022 | Published By: Arun Mehata
Share this
Married 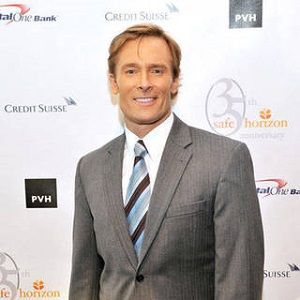 Lonnie Quinn has been married for over 15 years!

Information regarding the past relationship of Lonnie Quinn cannot be found at the moment. He married Sharon Quinn on January 13, 2007.

They have been married for more than 15 years.

The couple has 2 daughters from the marriage Lily and Savannah.

Lonnie also has a son Nate from his past relationship. They currently live on the upper west side of Manhattan.

Nate is a current student of The Bronx High School of Science.

They have had a perfect long-lasting marriage and no official news of divorce has yet emerged.

Who is Lonnie Quinn?

Lonnie Quinn is an American actor and the lead weather anchor on WCBS-TV.

Furthermore, he has also been a weather anchor for CBS This Morning Saturday. Additionally, he portrayed the role of Will Cooney on ABC’s ‘All My Children.

He has six brothers and sisters but there is no information about his parents. Additionally, he is of American nationality and Caucasian ethnicity.

Brief Information regarding his early life is not available at the moment. He had a keen interest in meteorology and related sectors since his childhood years.

Per his education, Lonnie graduated from Boston University and he has a bachelor’s degree in communication.

In addition, he joined the Boston swim team during his time there. Currently, he has a Federal Aviation Administration Certificate.

Quinn’s first job was for WVIR situated in Charlottesville. Initially, he worked as a cameraman.

Previously, he had worked for WADA-LP, WQMZ-FM, and also for WVAO. Next, he joined CBS 2 in April 2007. He had previously worked in WTVJ in Miami as well.

Lonnie’s most notable work as an anchor was during the 2005 hurricane season. He worked hard during this time and tracked the hurricane.

Later, people recognized him for his work in this field. His coverage of Hurricane Irene is regarded as one of the best works in his career.

Lonnie Quinn was a weatherman at WTVJ NBC6 in Miami in April of 2002. He was handed the title of the lead weatherman at WCBS/Channel 2 in New York in June 2007. He became a newly hired meteorologist at WCBS NY.

Additionally, Lonnie also had a comparatively brief acting career. During his time as an actor, he appeared in numerous movies and television series including ‘The New Hollywood Squares’, ‘Holiday in Bryant Park’, ‘As the World Turns, ‘Saturday Early Show’, ‘The Early Show, ‘CBS News Up to the Minute’, ‘CBS This Morning: Saturday’, ‘All My Children’, ‘Santa Barbara’, ‘Kiss of a Killer’, ‘In a Moment of Passion’, ‘Dexter Dickie’, ‘Elementary’ and others.

Lonnie garnered the nomination for the Soap Opera Digest Award for Outstanding Male Newcomer: Daytime for ‘All My Children’ in 1990.

Lonnie’s long years of marriage were rumored to have come to an end which later turned out to be completely false.

Furthermore, there was a rumor that he might be gay due to the sighting of him with Chris Wragge.

This, however, has not been confirmed by any of them. Additionally, he was also involved in a controversy over his outburst during a weather forecast in January of 2015.

Moving towards his body measurements, Lonnie has a height of 5 Feet 9 Inches or 70.8 inches.

Additionally, his hair color is blonde and he has an athletic body build.

Besides this, there is no information about his weight, shoe size, or dress size.

Lonnie Quinn is quite active on social media.

Who is Lonnie Quinn's wife?

Is Lonnie Quinn a real meteorologist?

Know the price of Lonnie Quinn’s Upper West Side home worth $2.19 million! Read to know about his wife and children