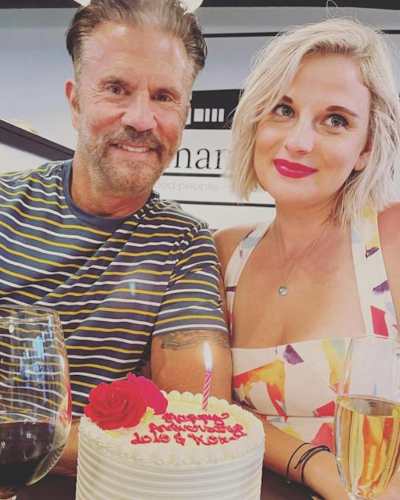 The American actor Lorenzo Lamas is in love with his fiance. He recently went to Facebook to announce his engagement with Kenna Nicole Smith. The actor popped the question to Kenna five months back during Valentine’s week. In the statement, he also revealed they are so much in love with each other. The news of his engagement made headlines despite him previously saying he would never get married after his fifth marriage.

The 63-years-old actor recently revealed a new milestone in his relationship. On July 24, he posted a Facebook relationship status after five months of popping the question to 36-year-old Idaho native Kenna Nicole Smith. Shortly after asking Nicole to marry him, he releases a statement to the press saying:

“Kenna and I met through my Godmother Francesca Daniels last April. I proposed to Kenna on Thursday the 11th of February In Las Vegas. She accepted my Lifetime Valentine’s request,”

Lorenzo dated Nicole for 10 months before he popped the question to his girlfriend during Valentines’ week. Lamas further stated that was the most romantic time of his life and they are deeply in love. The actor also added it is not like any other love and they are looking forward to becoming husband and wife. He also made a post on Instagram writing:

“Kenna and I got engaged in Vegas last night. I know I know, what the heck was she thinking?!”

The actor and his fiance celebrated their engagement last month by getting on a ring finger. Lamas got “KL” tattooed with a heart while his fiance got initials “LL” with a heart.

Lorenzo Lamas, popularly viewed as an actor, television director, and television producer is rather an all-rounder. He is engaged in martial arts and is even a motorcycle enthusiast. Popularly known for his character in the soap opera Lance Cumson, for which he got nominated for best supporting actor in Golden Globe Award. See more bio…

How Did John Travolta Opened Up About Kelly Preston’s Death To Her 10-Year Old Son!
Tags : American Actor