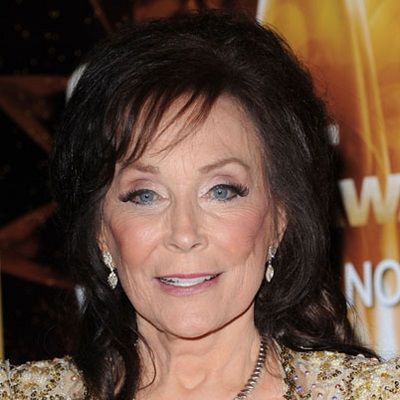 We would drive to a radio station and I would go in with my record. Some of them would say they couldn't play it, or they wouldn't play it, and some of them played it while I was there. I just sat there until they played it. I imagine they thought to themselves, "This girl is going to stay here all night if we don't play her record.".

She was my closest friend. She was the only person, other than my husband, I could turn to in a crisis. There was a lot of resentment when I first came to town. But Patsy was strong-willed and always taking up for me. If it hadn't been for her, I don't think I would have lasted.

I wrote that because I got mad at my husband one Christmas. I sent him down to the Kmart because bibles were on sale. So he bought me a bible - and got his girlfriend silk pants and a silk shirt. When I heard about that, we had a good ol' hot Christmas.

Loretta Lynn got married to Oliver Vanetta Lynn Jr. famously known as Doolittle Lynn who was 21 at the time on January 10, 1948. The couple exchanged the vows only after meeting one month earlier.

Loretta’s husband cheated on her and was an alcoholic but she stayed with Oliver till he died on August 22, 1996. They fought frequently and their marriage was shaky to the day of Oliver’s death.

Who is Loretta Lynn?

Loretta Lynn is among the well-known country music singer-songwriter with multiple gold albums in a career spanning almost 60 years in America.

Loretta Lynn was born in Butcher Hollow, Kentucky, the United States on April 14, 1932. Her birth name is Loretta Webb. Her father’s name was Melvin who worked as a coal miner, storekeeper, and farmer, and her mother’s name was  Clara Marie Ramey Webb.

Loretta’s father died at the age of 52 of black lung disease a few years after he relocated to Wabash, Indiana.

Loretta holds American citizenship, but ethnicity is unknown. Her birth sign is Aries.

Talking about Loretta’s education history, there is no information about her educational achievements.

Talking about her profession, Loretta Lynn started improving her guitar playing skills and took up a singing position at the Delta Grange Hall, with Pen Brother’s band – The Westerners. In the year 1959, she formed her own band, along with her brother Jay Lee Webb, titled, Trailblazers. Then, she performed at a televised talent contest, which she eventually won.

Likewise, the performance in the talent contest led her to gain a contract with Zero Records. The company arranged for the recording and release of her four songs, ‘I’m A Honky Tonk Girl’, ‘Whispering Sea’, ‘Heartache Meet Mister Blues’, and ‘New Rainbow’. In fact, for the promotion of the song, she traveled to various radio stations playing country music. The efforts led to her song becoming a minor hit.

Then, she moved to Nashville in the late 1960s where she began cutting demo records for the Wilburn Brothers’ Publishing Company. It was while working with the Wilburn’s that her career witnessed yet another upscale drive as she secured a contract with Decca Records.

Very soon, she became the number one female singer in country music. Whereas, her first single under Decca Records, ‘Success’, like its title, was a super successful venture. She supplemented the success of her earlier ventures with equally or more successful songs such as ‘Wine, Women, and Song’.

In the year 1964, she released an album with Ernest Tubb titled, ‘Mr. and Mrs. Used To Be’. Additionally, the album gained the top 15 positions on the charts. Similarly, she followed them up with two albums, ‘Songs From My Heart’ and ‘Blue Kentucky Girl’. Most of the songs from the album were enlisted in the Top 10 Country hits.

Besides that, over the next couple of years, she followed the success of her feminist single by coming up with several hit tracks and albums in the game genre including, ‘Don’t Come Home A-Drinkin’, ‘Fist City’, ‘What Kind of a Girl (Do You Think I Am)’, Your Spaws on Warpath’, and ‘Woman of the World (Leave My World Alone)’.

Also, in the year 1971, she collaborated with Conway Twitty to come up with several successful singles. They went on to become one of the most successful duos of country history.

In the following year, along with Twitty, she came up with an album, ‘Dynamic Duo’, a name that reflected their personality and popularity.  In the same year, she released a tribute album, ‘I Remember Patsy’ to honor her friend and country-pop singer. Subsequently, she released two studio albums, ‘Loretta’ and ‘Lookin’ Good’.

In 2010, she was bestowed with the Grammy Lifetime Achievement Award. During 2013, she was presented with the Presidential Medal of Freedom by President Barack Obama.

She has an estimated net worth of around $65 million and she has earned that sum of money from her professional career.

There was a rumor about Loretta’s death. Currently, she is far from rumors and controversies.

Loretta Lynn has a height of 5 feet 2 inches and she weighs 59Kg. Additionally, she weighs is 37-25-36 inches and her bra size is 34B. Loretta’s hair color is dark brown and her eyes color is grey.

Furthermore, her dress size is unknown and her shoe size is 10 (US).