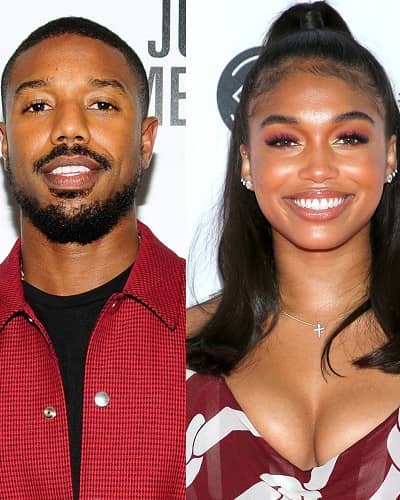 It’s official for Michael B. Jordan and Lori Harvey! They made their relationship official on 10th January 2021 sharing a romantic picture of them. Jordan was the first one to make it public. He shared a picture of them cuddling. They were previously photographed together during the holiday season.

Similarly, on 30th December 2020, they were spotted stepping off a plane together in Salt Lake City. They did not share pictures with each other but made snowboarding videos and photos at similar locations on Instagram Story.

Earlier in November, Michael and Lori were spotted arriving at an Atlanta airport. The same month, he revealed that he was looking for a romantic partner. He revealed the personality traits he looks for in a girl,

“A sense of humor, true understanding, because [an actor’s] life is not conducive to a relationship—it’s really not. Somebody that’s nurturing. I’ve got a list. That’s probably why my ass is still single, but yeah, it’s a list,”

“The freedom to go wherever I wanted in public, not worry about paparazzi. Enjoy somebody’s company. Go for a drive, dope playlist. Drive somewhere just for dessert. I’m definitely a movie guy, and then I’d ride the vibe for the rest of the night.”

How much is her father Steve Harvey’s net worth in 2021?

Steve Harvey has an estimated net worth of $200 million. He earned a salary of $45 million. He has worked in TV series like Steve on Watch, Family Feud, NFL Honors, Steve, Comedians in Cars Getting Coffee, Who Wants to Be a Millionaire, and more. Likewise, he is mostly known for being the host and producer of The Steve Harvey Show.

As a host of Family Feud, he makes $10 million and from hosting radio duties he makes $20 million. He has also written books like Act Like a Lady, Think Like a Man, Straight Talk, No Chaser, Act Like a Success, and Jump, Take the Leap of Faith to Achieve Your Life of Abundance.

Lori Harvey is an American model known for her successful modeling career. She has done modeling and endorsement work for brands like Dolce & Gabbana, TRESemmé, and NyQuil & DayQuil. She has a huge social media fan base with more than 2.1 million followers on her official Instagram account. Read more bio…