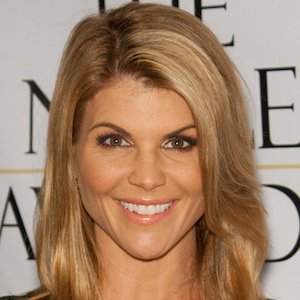 When you don't work for a while, immediately you get a little black mark next to your name. You have to make difficult choices in your life, and you just have to be happy with them.

When my girls were babies, I had pacifiers all over the house. Now that I've gotten older, I can't see as well, so I've got drugstore reading glasses everywhere instead.

What is the relationship of Lori Loughlin?

Lori Loughlin is a married woman. She has been married to fashion designer Mossimo Giannulli on Thanksgiving November 27, 1997.

The couple has welcomed two daughters: Isabella Rose Giannulli, and Olivia Jade Giannulli born on September 16, 1998, and September 28, 1999, respectively. Their daughter, Isabella is an actress whereas Olivia is a YouTuber.

Also, she has a step-son named Gianni from her husband’s previous relationship.

Who is Lori Loughlin?

Lori Loughlin is an American actress, producer, and model. She is best known for her role as Rebecca Donaldson-Katsopolis on the ABC sitcom ‘Full House’ from 1988 to 1995.

Lori’s father is a foreman for the New York Telephone company. After a year of her birth, her parents moved to Hauppauge, New York on Long Island. She has a younger brother named Roy.

Lori holds American citizenship but her ethnicity is a mix of English, Irish, and German.

She joined Oaks Elementary School and she would go on to graduate from Hauppauge High School.

Lori Loughlin was hired to become a print model at the age of 11. Her modeling experience gave her the confidence to become an actress. Then, she was cast as Jody Travis in the ABC soap opera ‘The Edge of Night’ at the age of 15 and portrayed the role from 1980 to 1983.

After that, she portrayed several guest roles in numerous shows for the next 4 years. She came to limelight after she appeared as Rebecca Donaldson in the sitcom ‘Full House’ in 1987. She portrayed the role until the cancellations of the show in 1995.

Similarly, her other notable performances include in ‘A Stranger in the Mirror’, ‘Critical Mass’, ‘Suddenly Susan’, ‘The Drew Carey Show’, ‘Birds of Prey’, ‘Moondance Alexander’, ‘Crawlspace’, ‘Fuller House’, ‘Homegrown Christmas’, and many more.

Also, she won several awards and nominations for her work to date.

She along with her husband put their Aspen, Colorado house on sale for $8.9 million and sold the house in July 2015 for $7.6 million. Again in 2017, they put their Los Angeles mansion on the market for $35 million.

She along with her husband and daughters were caught in the controversy surrounding US College entrance scandal, dubbed Operation Varsity Blues. The couple got arrested for that and later released on $1.4 million bails each.

The couple was accused of paying $500,000 in bribes to get their two daughters into University of Southern California as recruits to the University’s crew team.

Lori will be jailed for two months and will be fined $150,000. She will also have to do100 hours of community service. However, due to coronavirus, there might be an exception to this punishment.

Lori Loughlin has a height of 5 ft. 5 inches and weighs 56 kg. She has hazel eyes and dark brown hair. Likewise, her body measurement is 36-25-36 inches and her bra size is 34B.

Lori is active on Twitter but she has hidden her fan followers. Also, she has deleted her Instagram account after a report surfaced alleging she cheated to get her two daughters, Isabella and Olivia, into USC.