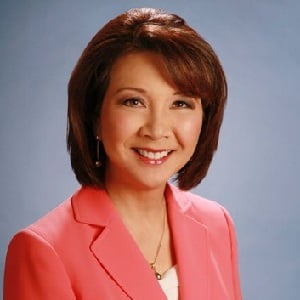 What is the relationship of Lori Matsukawa?

Lori Matsukawa is a married woman. She is married to Larry Blackstock. The pair married on June 13, 1982. They have a son together: Alex who currently lives in San Francisco.

Who is Lori Matsukawa?

Lori Matsukawa is an American journalist. People mostly know her as the anchor of the KING 5 News at 5, 6:30, and 11 p.m. on weeknights.

Matsukawa was born in Hawaii in the year 1956. Throughout her childhood years, she grew up in the tropical wonderland of Hawaii. She has two younger sisters.

Lori is of American nationality. Furthermore, there is no detailed information available about her ethnic background at present.

Talking about her education, she attended Stanford University. In addition, she also graduated from the University of Washington.

Lori Matsukawa initially competed in the Miss Teenage America Pageant at the age of 17. Additionally, she also became Miss Honolulu.

On November 24, 1973, Lori has crowned Miss Teenage America. Matsukawa dreamt of becoming a piano teacher but later started her career as a print journalist.

Matsukawa anchored and reported in Redding, CA; Portland, OR, and Seattle. At present, she serves as the anchor on KING 5 News.

Furthermore, she has covered several important stories to date including Governor Locke’s first trade mission to China, disaster recovery reporting in Fukushima, the Winter Olympics in Salt Lake City and Vancouver, and pulling 9-Gs in an F-16! Among others.

Matsukawa has received numerous awards in her career. She is an Emmy Award-winning journalist. Additionally, she also received the Lifetime Achievement Award that was presented by the Asian American Journalists Association.

Furthermore, her name was inducted into the University of Washington Communication Department’s ‘Alumni Hall of Fame’ in 2002.

Matsukawa has not revealed her current salary. Furthermore, there is no information available about her estimated net worth at present.

Matsukawa has not been part of any notable controversies in her career. Furthermore, at present, there are no rumors concerning his life and career.

Talking about Lori Matsukawa’s body measurement, there are no details available about her height and weight. Her hair color and eye color are dark browns.