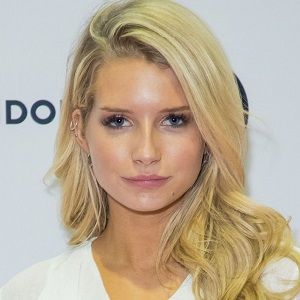 What is the relationship of Lottie Moss?

Lottie Moss has been in a relationship with Alexander Mytton. They are spotted together in different places and there seems to be much love between them.

Who is Lottie Moss?

Lottie Moss is a British model. She rose to fame after her print debut in a 2014 issue of Teen Vogue.

Moreover, she gained popularity for being the sister of Kate Moss who is an English model. She is one of the famous names in the world of fashion and modeling.

Moss was born on Jan9 1998, in England. She’s now 19-years old. Her father’s name is Peter Edward Moss and her mother’s name is Inger Solnordal Moss.

She is Kate Moss’s half-sister. Moss now lives with her parents in Haywards Heath, West Sussex. The family there owns a Toll House shop in Lindfield.

The information about her education and the name of the school and universities he studied at is unknown.

But it is heard that she is studying a Level. She attended London Fashion Week with her sister in 2014.

Lottie has been modeling since she was in her early teens. Her parents own the Toll House store and she uses to work with her parents. She started modeling from a young age when she was 13 yrs old.

She took part in a test shoot for the agency. The shoot was launched by Kate’s Storm Management and it was organized by her parents and Sarah Doukas.

Her first official shoot was published in Teen Vogue. She wore a chic red and white striped sweater with a red jacket and her shoot was outstanding.

Respectively, she gets a chance and performs in Dazed & Confused. Lottie’s first campaign was modeling in Calvin Klein for items of MyTheresa.com.

She has just made her catwalk debut at Paris Fashion Week, appearing in the Sonia Rykiel Autumn/winter 2015 show. She had her runway walk confidently in a printed velvet dress, black booties, and a petite gunmetal handbag which amazes all of the audience.

Her passion for work has brought her to perform on various other platforms too. She credits that her old sister is inspiring her to move into the world of fashion, as she told Teen Vogue in 2014.

She signed with Kate’s original agency, Storm Management, at sixteen. And now she has various modeling and receives great appreciation. The young modeling scion has just made her London Fashion Week debut in style.

Lottie Moss: Salary and Net Worth

Lottie’s net worth is unknown as she doesn’t have built her career so strong.

But she must have good earnings as she also said that she was able to manage her study fees through her earnings. Her sister Kate’s net worth is $80 million.

She doesn’t involve in any of the rumors. She has just started her career and so her personal and professional life is going well without involving in other controversies.

As a model, Lottie has maintained a slim perfect body. She regularly goes to the gym and works out for maintaining her body fitness. The model stands at a height of 5 feet 6 inches.

Lottie has a body measurement of 36.5 inches hip, 24.5-inches waist. Her shoe size is 5.5(US). She has light blonde colored hair and blue-colored eyes.

She is active on different social media.

She is active on Instagram with 387K followers. Likewise, Lottie also uses Twitter and has more than 20.8K followers. And she is not active on Facebook.

Also get to know more about the model and Instagram personality, Alex Lange.