What is Lotus Blossom Relationship Status!

Lotus Blossom is still young enough to be in any relationship. The 14 yrs old actress is more focused in building her career as of now.

She shared a close bond with her family members and is often seen spending time with them. 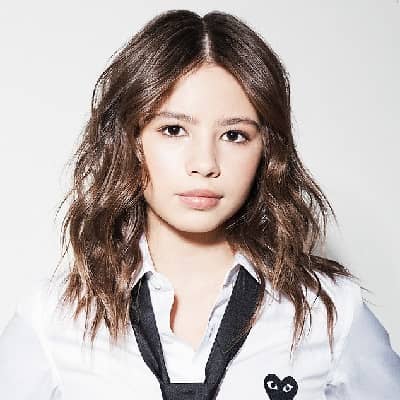 Who is Lotus Blossom?

Lotus Blossom is an American actress, model, and stuntwoman.

Lotus came into popularity after appearing in a T-Mobile campaign. In that commercial, she played an adorable, but sassy, little girl selling lemonade. She even earned a 2018 “Best Actress” nomination from the Young Artist Academy.

The actress is nicknamed “The Ninja Princess”. It is because she confidently performs her own stunts, and is gaining a reputation as a fierce Asian-American stuntwoman.

Blossom was born on October 31, 2007, in Hollywood, CA on Halloween.  She is of mixed ethnic groups (Filipino, Asian & American).

Lotus is very close to her family and often shares various pictures with them on social media. She grew up in a family of artists.

Her father’s name is Ernie Reyes, Jr who is a Filipino martial arts prodigy and action hero. Likewise, her mum is actress Lisa Reyes. Her grandfather Ernie Reyes Sr. was also an actor, martial artist, and fight choreographer.

Lotus was two yrs old when her parents married. The 14 yrs actress has two siblings: Lulu Eisenberg and Phoenix Reyes.

Lotus trains at West Coast Martial Arts with her father.

Growing up in a family of artists Lotus was fond of acting from a young age. She professionally debuted into acting from a commercial of T-Mobile campaign. She was just 10 yrs old when she played an adorable little girl selling lemonade. Grabbing all people’s attention, no sooner she receives a role in tv series.

Lotus Blossom is known for being a cast member of the Brat original web series Hotel Du Loone. There she starred alongside Hayley LeBLanc as Tonya.

Her big-screen debut was working for the independent feature, Magic Max in 2018. The movie also stars Sally Kirkland, Barry Corbin, and Parker Bates. Likely the actress received worldwide attention after appearing in the movie.

The 14 yrs actress came more into the limelight after she was starred in the hit Netflix movie We Can Be Heroes. The movie is a sequel to The Adventures of Sharkboy and Lavagirl & is directed by Robert Rodriguez.

With a short span, Lotus Blossom has established her career in the industry. She must receive a good earning from her movies. Her net worth is said to be around $1 million.

Her series, We can Be Heroes has grossed $47.4 million in the United States and Canada. Similarly, it grossed $27.5 million in other territories for a worldwide total of $74 million, against a budget of $20 million.

The actress has already made a place in the audience’s heart with her acting. On the contrary, she has influenced people in a positive way and hasn’t round-faced any reasonable dispute or scandals up to now.

The 14 yrs actress stands 5 feet tall now. Her height will definitely increase along with her age in the upcoming days and her body mass is around 39 kg.

Similarly, she is beautiful with the same dark brown eyes and hair.

The actress debuted on IG on Jue 9, 2019 posting a photo of herself on Pride Day. And as of 2020, her Instagram account holds over 140 K followers.