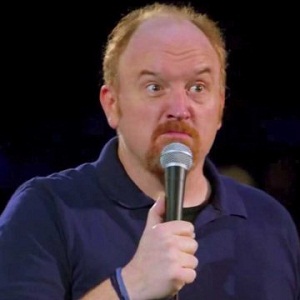 Louis C.K. had a relationship with Sarah Silverman who is an American comic writer. Although the relationship didn’t last too long. Louis married artist and painter, Alix Bailey in 1995.

The couple has two daughters named Mary Louise Szekely (2005) and Kitty Szekely (2002). In 2008 the couple split up with divorce but with the joint custody of their daughters.

at present, he is in a relationship with Blanche Gardin. They started to date each other in 2018.

He has co-written, co-produced, and directed a series named Better Things.

He is always remembered for his shows like The Dana Carvey Show and The Chris Rock Show as a writer. Loui’s third album Hillarious is one of the best stand-up comedy performances in the history of art. Louis wrote, edited, directed and acted in all 13 episodes of each season of his television series Louie

Born as Louis Szekely on September 12, 1967, in Washington DC. Louis C.K’s family moved to Mexico City when he was one year old. Later at the age of 7, they again shifted to Boston, Massachusetts. His father is Luis Szekely.

Louis was brought up by his single mother, Mary Louise Szekely along with three sisters after his parents got divorced at the age of ten years. Loui’s ethnicity is Irish, German, and Mexican.

His mother usually watched the Television show named BAD which inspired him to work on television. Because it’s difficult to pronounce his name Szekely, he changed it to C.K.

Louis attended after-school Catholic class until they completed communion. He was offered admission into New York University’s Tisch School of the Arts but he did not bother to apply. Louis graduated from Newton North High School in 1985.

His first work was as a mechanic. Working in public access TV gave him the technical knowledge to make his short films.

Louis C.K. did his first stand-up comedy at a comedy club in Boston. He was given 5 minutes on stage but had only the content of 2 minutes which discouraged him so much. At the age of 17, Louis directed the comedic short film Trash Day. Louis was hired as a staff writer for Caroline’s Comedy Hour.

He performed his comic act on various TV series including ‘MTV Half Hour Comedy Hour. He debuted as a writer and director in Tomorrow Night. His second movie was Pootie Tang in 2001. He didn’t direct any movies after its review was received negative. The show was stopped after 1 season although of a good review. His first hour-long special ‘Shameless’ was launched on HBO in 2007.

His concert film ‘Hilarious’ was honored with the Grammy Award for ‘Best Comedy Album. This writer is one of the few wealthy guys that did it themselves with the total net worth of $20 Million.

Louis was once in controversy because of his habit of sexually harassing female comics. She was once about to get busted due to his habit.