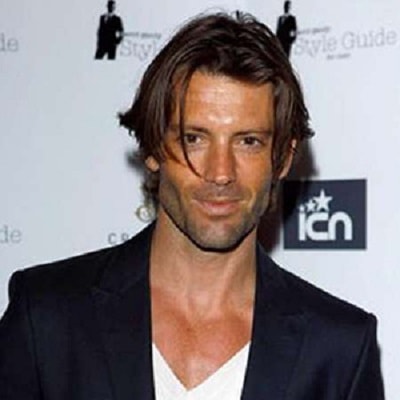 Louis Dowler is currently living his single life. Previously, he married American actress, dancer, and model, Jennifer Esposito on 16th November 2014 after dating for two years. They managed to be together as husband and wife till 2016.

Nevertheless, his wife, Jennifer Esposito filed for a divorce on grounds of irreconcilable differences which were allegedly traced to their bakery business.

Before his marriage to Jennifer, he dated Hollywood famous actress Kate Winslet in 2010 but their relationship did not stand the test of time. The pair separated after one year.

Who is Louis Dowler?

Louis Dowler is an English actor as well as a model who has made his appearances in several films and commercials like Burberry Model campaign. Also, he came into limelight after dating the actress Kate Winslet of ‘Titanic Fame’.

He was born on September 29, 1975, in Penzance, United Kingdom. He was born to father Alexander Dowler but his mother’s name is still unknown in front of the media. Also, he has not provided any information about his siblings.

Louis holds British citizenship but his ethnicity is unknown.

He achieved a bachelor’s degree in strategic marketing from the University of Wales located in Cardiff, Wales, UK.

He started his career as a model and came into limelight after appearing in advertising campaigns for Burberry clothing. Later, he appeared on the cover of several magazines and also modeled for brands like Tommy Bahama.

Similarly, Louis Dowler has appeared in several model events and fashion events including the Burberry model campaign. Moreover, he worked for many worldwide brands as a cover model.

His ex-wife Jennifer first made her television appearance in ‘Law & Order’ in 1996. She came into limelight after she depicted the character of Ruby in Spike Lee’s ‘Summer of Sam’.

She even rose to fame when she got a chance to show her acting skill in the Academy Award Winning film ‘Crash’.

It seems Louis has not been awarded and nominated for his work to date.

The talented actor must have accumulated a huge sum of money from his carer however, his exact net worth, salary, and income.

He along with his ex-wife, Jennifer Esposito invested in the celiac-friendly bakery ‘Jennifer’s Way’ in West Village in Manhattan which offered “gluten-free, dairy-free, soy-free, sugar-free” food items that are good for people suffering from autoimmune disorder celiac disease.

Also, he sued Jennifer for $43 million in March 2016 after she ‘hijacked’ the company website.

Louis has been successful in maintaining his celebrity status and has not been involved in any rumors and controversies in his personal and professional life.

Louis Dowler has a height of 6 ft. and weighs average. Also, he has blue eyes and brown hair. But, his shoe size, dress size, body measurement, etc. are not available.