Louise Linton is a Scottish TV and film actress, director, and producer.

Louise Linton was married to Los Angeles defense attorney Ronald Richards in 2006. However, their marriage life lasted just for 3 years and they parted ways in 2009.

After that, she married Former United States Secretary of the Treasury, American investment banker, and film producer, Steven Mnuchin on 24 June 2017. They met for the first time through mutual friends at a 2013 wedding reception in Los Angeles. The couple is happy together and there is no sign of separation till now. 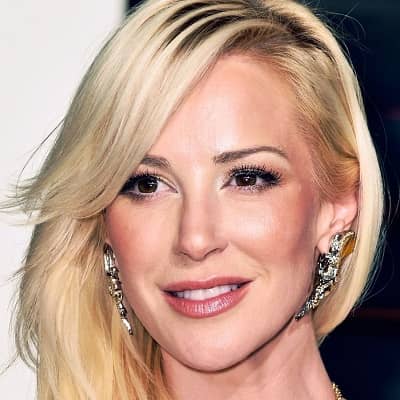 Who is Louise Linton?

Louise Linton is a Scottish TV and film actress, director, and producer who has appeared in various films and television series. Likewise, she is famous for ‘Elizabeth’ in the horror film, Intruder and ‘Louise Patterson ’44 ‘ in the crime drama tv series, Cold Case.

Louise Linton was born in Edinburgh, Scotland on December 20, 1980. As of 2022, she will be celebrating her 41st birthday. Her real name is Louise Hay. She adopted her stage surname ‘Linton’ from her grandfather.

She grew up with her parents Rachel Hay and William in a Melville Castle outside Edinburgh that her father owns. Her father is a businessman. Likewise, she has an older sister Suzanne Caroline Hay and an elder brother named David Hay. Unfortunately, her mother passed away at 53 age due to breast cancer, when she was just 14 years old. Similarly, she was interested in acting since her childhood days.

She is of Scottish nationality and her ethnicity is not known. Similarly, her birth sign is Sagittarius.

Linton completed her schooling at St George’s School for Girls and went to college at Fettes College. Likewise, she hired a private coach from the London Academy of Music and Dramatic Art to accomplish her dream as an actress.

Louise began her career in the war drama movie Lions for Lambs in 2007 with a small role as a Skin Care Consultant. Likewise, she works on the board of Mattel Children’s Hospital UCLA and the Old Fettesian’s US Board of Trustees for Fettes College situated in her hometown, Edinburgh.

She moved to the USA to continue her career as a film actress. Moreover, she portrayed the role of Louise Patterson ’44 in Episode: “WASP” of the Cold Case. Louise’s role in the series got huge recognition and was much loved by the audiences and critics. She has acted in many TV series that including:

Besides, TV series she has also produced and acted in the 2016 horror film Intruder in the role of the character Elizabeth. She is also an executive producer of the movie Odious. Similarly, she has written, directed, produced, and appeared in the movie ‘Me, You, Madness‘ as Catherine Black which is also her latest movie. Some of her other movies are:

Of all her acting, movies, and dedication, why not she has a net worth of around $20M as of 2022. Likewise, Louise is a dedicated and hardworking person who focuses on her professional career.

In 2009, Linton was honored at the Scottish Style Awards as the country’s ‘Most Stylish Woman.’

In January 2018, Linton was outed by The New York Times for purchasing fake followers on social media platforms in order to increase her following.

Louise stands 5 feet and 7 inches tall and weighs around 56 kg. Similarly, she has a slim-shaped body with 34-23.5-34 inches of measurements. She has a bra size of 34B. She has blonde hair and dark brown color eyes.