The Couple Who Fell In Love Without Seeing Each Other; Beautiful Married Life Of Lauren Speed And Cameron Hamilton! 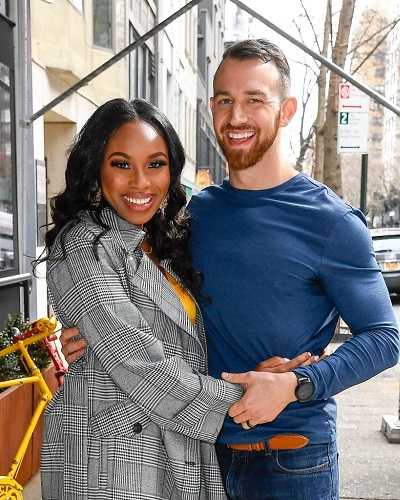 Lauren Speed and Cameron Hamilton won thousands of hearts after appearing as a couple on the show ‘Love is Blind’. The reel life couple later turned into the real-life couple. The couple became one of the favorite couples after the show in the internet. The show finished airing on February 27 on the Netflix.

After the end of the production of the show in 2018, the reel life couple turned into the real-life couple. The internet’s favorite couple, later on, tied the knot on real life.

They are married from a year and a half and are officially husband and wife. They are living together in Atlanta in Hamilton’s house which he calls ‘our house’ now. The couple has adopted pet dogs together.

“Well, it would be hard to (fake it) for a year and a half. You’re talking about blending families. Like, my father was there and crying at my wedding. My mother, Cameron’s parents. (Everyone is) happy and involved in it all. I mean, we live together. We have a dog together.”

In the show ‘Love Is Blind’ the participants can’t see each other till they get engaged. Though the couple fell in the love in such an unusual scenario, they are still keeping it strong.

You may also read- Amanda Knox Married Her Husband Christopher Robinson For The Second Time!

How did they fall in love?

All the fans immediately adored the couple after they started liking each other on the show. On the show, the other six couples who got engaged went through a difficult path. Hamilton mentioned not looking at each other and being far from the devices like phone really helped them connect through their souls on pods. He also mentioned the environment helped them to focus on each other’s deeply and get to know deeply.

The couple hung out on the pods and time went like a fraction. Looking at each other for the first time left both of them to admire each other. They legally married on the show in 2018 afterward. Hamilton described their stay on the pods saying:

“Things like sharing physical space with each other, but at a certain point with anything, you have to take a leap of faith with relationships. Right? And that was the case here.”

However, they had to hide their marriage until the show ended not to spoil the ending. The couple who have already tied the knot legally definitely have the plans to read their vows on a traditional way in the future.

Both Hamilton and Speed said they will have a traditional wedding which they skipped because of the rush at their first wedding. They also often gush about each other on their respective social media account and share pictures.
You may also read- Frankie Muniz And His Longtime Girlfriend Paige Price Got Married!

Taraji P Henson talks about how she is planning for her wedding!
Tags : American Actor American Actress Love Is Blind