Posted on May 5, 2022 | In Dating , Entertainment , Relationship
Share this 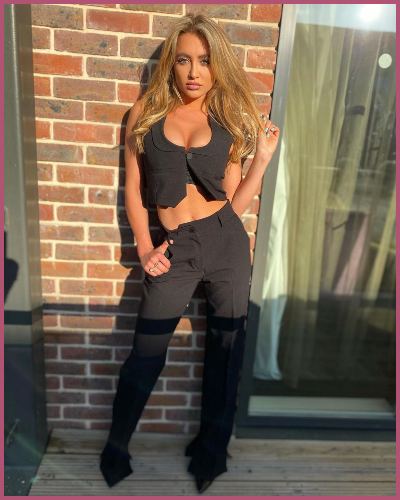 Love Island star Georgia Harrison was spotted out in London on Saturday night posing braless under a waistcoat along with her friend Fran Parman.

This is not the first time, the 24-years of reality star posing braless in the media. The Love Island beauty has never been shy to put her incredible figure on display.

On April 30, Harrison flaunted her ample assets as she posed in a black waistcoat which was held together with one button.

Also read “Love Island’s Kaz, Ellie and Georgia raise the temperature with their Hot Bod on the Beach! Their Sizzling Bikini Photo”

Georgia completed her sexy ensemble along with a pair of wide-legged black trousers and added a pair of towering strappy heels. The reality star caught up while leaving Park Row restaurant in Soho.

Similarly, she is accessorized with a bold necklace and a pair of drop earrings.

A week ago, Harrison has revealed she is receiving counseling in a bid to work on her trust issues in relationships. The reality star admitted she is now single and is currently focused on herself.

“I’m never dating again. I don’t date. I genuinely think I’ve got a lot of issues. Trust issues potentially, and I’ve started counselling for it. I don’t date people enough, and it’s not normal at my age. I’m 27, and at my age I should be dating and connecting with people,”

“Yes, I’m on there. Sophie Kasaei told me she was declined, so I can’t believe I made it through the net. Somehow I made it on there,”

Harrison also admits counseling has been a useful resource while getting over her dating fears and reflects on her previous negative relationships. She expressed,

“I find it really good. I always thought it would be really negative having to bring up past things, but it made me think things about myself, like small patterns that I didn’t notice,”

Georgia Harrison is a British TV personality and model. She is popular for appearing in the third season of Love Island.

She is also an influencer and is popular on social media sites, including Instagram. See more…