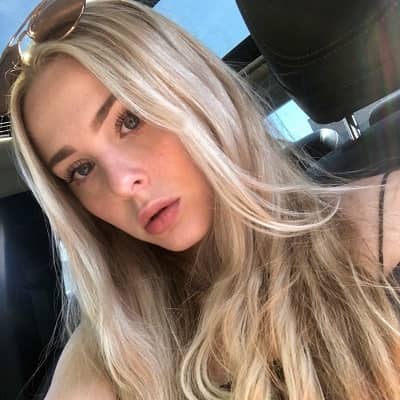 Lovey James is in a relationship with Enzo Steiner as of 2020. Her boyfriend Enzo is an athlete.

They started dating in the year 2020. They seem to be deeply in love with each other. During her high school year, her Prom date was Michael Deming.

Her other past relationships have not been publicized. She has not been engaged yet.

Who is Lovey James?

Lovey James is a young Rising Star in the Music industry. She is a multi-talented dancer, songwriter, actress, and singer.

James was a runner-up nominee for Clear Channel’s Channel One News “Artist of the year”. Further, she has been featured on Chicago’s Morning show WGN, MTV, VH1, Fanlala, and Kidzbop.

As in 2014, she auditioned on American Idol but unfortunately, was sent home after she couldn’t make it to the top 6.

Lovey James is a popular pop singer who was born on November 25, 1997. She was born in Portland, Oregon. As of 2021, she will be 24 years old and falls under the sun sign of Sagittarius.

As for her parents, there’s no information and name on her father. Her mother’s name is Rebecca Bundy. But it is known that she has two younger sisters and an older sister.

Her elder sister’s name is Kylie Sengsavanh. Kylie is married to Savon Sengsavanh and has a daughter with him. It seems that she has not yet publicized any information based on her personal life.

There are no details on any other relatives, cousins, etc at the moment. She holds American nationality as she was born and raised in Portland, Oregon. Her ethnicity is Caucasian.

From a very young age, she was passionate about music. From the age of 6, she had already begun performing for audiences around the US. She would spend most of her time on music. At the moment, She has a puppy Indie and its breed is Half Chihuahua, half Daschund. She had earned a place on The Portland Stars dance team, directed by a former New Orleans Saints Cheerleader.

Lovey James is a well-known multi-talented singer. However, there’s no information or name of her educational institute on the media at the moment. So, she must have completed her studies considering her age and profession. If not, she might have dropped out and continued pursuing her career in the music industry.

Lovey James has always been passionate about music since a very young age. At the age of 6, she had started performing for audiences around the U.S. In the year 2014, she had participated in the 14th season of American Idol. Her passion for music motivated her to pursue a career in the music industry. Some of the popular songs are “Rollercoaster”, “Can’t Break a Broken Heart”, “Who You Are”, and others.

Currently, she uploads her original songs as well as cover songs on her YouTube Channel. She has made cover videos of top artist’s songs such as Taylor Swift, Rihanna, and Passenger. She created a YouTube account on 21 December 2012 and has achieved 4,948,468 views.

James likes to take part in many charity projects. She helps to raise a great sum of money for children in need and serving as an ambassador of Child Help. Another one is Steven Solomon, who wrote the track called “Tricks” for her. Other collaborators of her profession have been working with celebs such as Selena Gomez, James Arthur, Demi Lovato, Halsey, and others.

James has been nominated for Clear Channel’s channel One News “Artist of the Year”, she has been featured on Chicago’s Morning show WGN, MTV, VH1, Fanlala, and Kidzbop. She was even a part of 14th American Idol in 2014 and had high hopes to get Golden Ticket in it. But unfortunately, she was sent home Lovey James: Net Worth, Income, Salary

According to other websites, her current net worth is estimated to be $1.5 million -$5.5 million. The main source of income is her profession as a singer and her YouTube channel as well. Further, she promotes a skincare brand named ‘Evologie’.

Even though she is quite popular on media, she has never been involved in any kind of rumors or controversy. She has always stayed low-key and kept her life private.

Lovey James stands tall at the height of 4 feet 11 inches.

She has a cheerful personality and a fit body. Mostly, she consumes SkinnyMint to keep herself in shape and she has an obsession with having pearly white teeth. She has a pair of blue Atlantic eyes and long blonde hair.

However, her other body stats like weight, chest size, hips size, weight size, etc are not given at the moment.

She is active on Twitter under the name @TheLoveyJames with over 18.1k followers.

In youtube, she is available on her own name “Lovey James” with more than 40.5k subscribers.

She has given her email ‘[email protected]’ for any further queries.