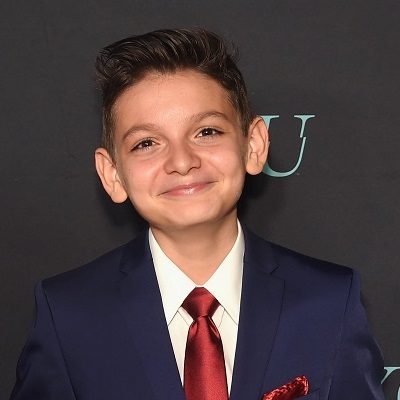 Luca Padovan is enjoying his life as a single. The actor has not been through any sorts of romantic relationships.

Currently, he is focusing on his acting career. While talking about girls, he shares a very deep friendship with the actress, Isabella Russo. Often he posts photos with her on special occasions like birthdays.

Besides that, he has a soft corner for dogs. Also, he has a pet dog with the name of Stella.

Who is Luca Padovan?

American Luca Padovan is an actor and voice artist. Padovan is renowned as the Paco of the TV series, You.

Recently, in 2020, he featured the TV series, The Magician as Young Quentin.

Luca Padovan was born on the 16th of August 2003 in New York, United States. He is of British-Irish ancestry.

He has an elder sister, Tina. As of now, he has not shared any information about his parents.

Currently, he is in the junior year of High School at the same High School with his sister.

At a very young age, he developed a keen interest in the field of acting. Also, he loves the idea of performing in the stage.

At the tender of 10, he started his acting career through the theatre. He made a debut in the theater as a child artist from the play, School of Rock. In a very short time interval, he became a renowned face in the theater.

Following such plays, he tried to expand his career in the field of movies and TV too. In 2014, he made his appearance in the short movie, Russian Broadway Shut Down as a child character. Next year, in 2015, he featured in Last Week Tonight with John Oliver as a boy singer.

In 2018, he made an appearance in the TV series, Crazy Ex-Girlfriend as Tucker Bunch. Despite being a minor and very short role, he got recognized due to his acting. The series turned out to be a milestone in his career.

After that, he was cast in the Netflix original series, You. In the romance drama, he appeared as Paco. Overall, he appeared in the 10 episodes.

Last, in 2020, he appeared in the mystery drama, The Magician as Young Quentin. Apart from acting, he is also a voice artist who has contributed his voice in the animated series like Super Wings as Jatt and The Rocketeer as Roland.

Through his acting career, he has made the net worth of $400k that also includes his dog, Stella.

He has brown eyes with brown hair. There is no information about his height and weight.

As of now, the actor has not been through any sort of controversy that creates a buzz in the media. He is doing good in his career.

He is also active on YouTube with the self-titled channel. In the channel, he uploads contents related to singing.