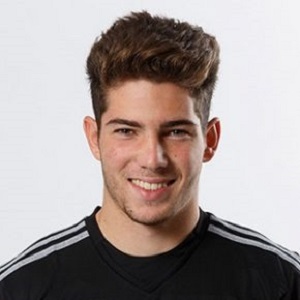 Luca Zidane is unmarried till now. According to his social site accounts, he is currently dating a girl named Charlotte de Froment. There is no information about when the couple began their relationship.

Luca and Lucia are seen together in public places. They love to hang out together. There are no other records of his past and present relationships.

Who is Luca Zidane?

Luca Zidane is a French professional football player. He currently plays as a goalkeeper for the Racing Santander.

He is the son of legendary football player Zinedine. Luca won the European Under-17 Championship with the French team in 2015.

Talking about his early life, he was born on May 13, 1998, in Marseille, France. He is the second son of former football player Zinedine Zidane(father) and Véronique Zidane(mother).

Luca spent his childhood watching his father’s games. His educational background is unknown. His nationality is French and belongs to Algerian-Spanish ethnicity.

Luca Zidane began his football career in 2004, with the Real Madrid CF training center. He has played with the various youth teams of the Madrid club. As a youth, he has won several junior tournaments.

He played for the Real Madrid CF youth team until 2016. In July 2016, his father and team coach Zinédine called Luca in the first team to participate in the UEFA 2016 Super Cup. He is currently the third goalkeeper of Madrid.

He at present is related to Racing Santander club on a loan basis. He joined them in the year 2019.

He won the European Under-17 Championship with the French team in 2015.  He also won the international tournament of Lafarge Foot Avenir with the France Under-18 team that same year.

This player’s net worth is estimated at around $2 million. Moreover, his salary as a soccer player is around $860k per year.

In November 2015, Luca faced criticisms when he received a red card in a match against Atletico Madrid.

Rumors are that Luca is set to be promoted to the Real Madrid senior team’s second goalkeeper by his father and the team’s manager, Zinedine Zidane.

Luca Zidane is 5 feet 11 inches (1.80m) tall. He weighs 78 kg. He has brown hair color and his eyes are hazel. Besides this his body measurements are unknown.