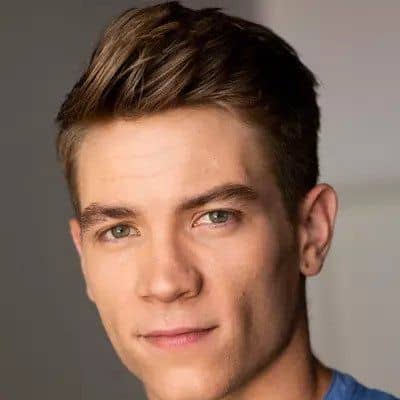 Who is Lucas Adams Dating?

Lucas Adams is currently dating, Shelby Wulfert co-star of the Disney Channel series, “Liv and Maddie.” They first met at the set of Beach while shooting for the series.

They are seen posting pictures of each other and showing love. On Valentine’s day, he uploaded a duo photo with his loved her and captioned the photo by wising Happy Valentines’s to her.

There is news of them getting married sooner. But, the fixed date is not revealed yet.

Who is Lucas Adams?

Lucas Adams is a known Daytime Emmy Award-nominated American actor. He is best known for appearing as Tripp Dalton in the reality tv show, Days of Our Lives and on Disney’s Liv and Maddie.

The series got him in the nomination of the Emmy Award for Outstanding Younge Actor in Drama series in 2018 and 2019.

Lucas Adams was born in Sherman, Texas, the United States on July 24, 1993. Adams is 28 years old as of 2022 and holds an American nationality. His ethnicity is Caucasian and belongs to Leo’s birth zodiac sign as per the astrologers.

Brent Adams is his father while Shari Adams is his mother and was an athlete. Lucas was about two years old when he emigrated to Bells, Texas along with his family. He has two elder sisters named, Audrie Adams Farris and  Brittnie Adams.

He has not disclosed further information about his siblings and educational background.

Lucas Adams wanted to be a professional athlete and actor from a young age. He received basketball, football, and baseball in high school and was drafted for baseball.

He offered a condition with the college stating that only if he got full scholarships he would continue his further sports games. He migrated to Los Angeles to stay along with his sister, Brittnie.

He landed a commercial role for Toyota Tundra that assisted him in affording his bills for some time. In 2012, he landed a speaking role in the episode of CBS’s The Young and the Restless.

She continued to work in the episodes of Dexter, School of Rock, Grimm, and Recovery Road. He was cast as Lou in HBO’s supernatural drama, True Blood’s final season.

He was cast as Josh Wilcox on the sit-com, Liv and Maddie which aired on Disney Channel in 2015. He appeared as Tripp Dalton in the soap opera, Days of Our Lives.

In August 2019, Lucas Adams departed from the series. Later, he has starred alongside, co-star Paige Searcy in the tv movie, Kidnapped by a Classmate which was launched in January 2020.

He booked the role in the American Pie tv movie, American Pie Presents Girls’Rules. Again, she got back in the soap opera, Days of Our Lives on September 4, 2020.

The net worth of Lucas Adams is accumulated to be approximately 18 million USD.

He has advertisement and endorsement deals with popular brands and companies. He earns around 100K USD per year.

Lucas Adams has maintained a clean profile so, he has not been involved in any sorts of rumors and controversies.

Lucas Adams has a muscular body standing at the height of 5 feet 11 inches tall weighing around 71 Kg.

He has a couple of brown eyes and hair of the same color as well.

On Valentine’s day, he uploaded a duo photo with his loved ones Shelby Wulfert co-star of the Disney Channel series, “Liv and Maddie.” He captioned the photo by wising Happy Valentines’s to her.

He is also active on Twitter which has garnered around 10.4K subscribers.

Stephen Colletti and Kristin Cavallari had a history together!! Let’s Find out about their Relation with each other During the show Laguna Beach: The real Orange County!