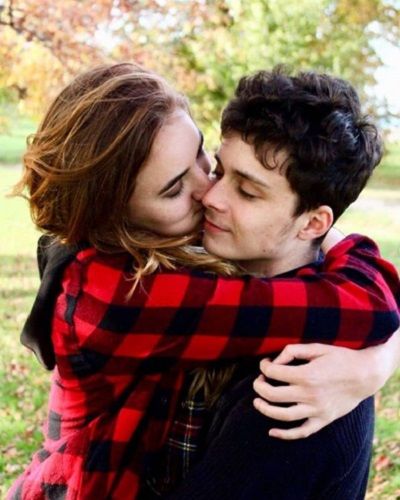 Lucas Jade Zumann is an American actor. Lucas has played in films like Sinister 2, Thrill Ride, 20th Century Women, Every Day, To The Stars, and Dr. Bird’s Advice For Sad Poets. His TV roles include Sense8, Chicago Fire, and Anne with an E.

Zumann made his motion picture debut in Blumhouse Production’s Sinister 2, after having just completed a role in the groundbreaking, global Netflix production Sense8.

Lucas Jade Zumann is currently dating Shannon Sullivan. They starting dating in July 2018. Sullivan is a YouTuber with more than 114k subscribers on YouTube. Her boyfriend Lucas also makes appearances on her YouTube videos. She made a video teaching him Spanish.

Sullivan makes videos in Spanish. She revealed that she used to visit her boyfriend at his shoot in the series Anne With an E. She was not allowed during the shooting but used to wait for him outside.

They made a car vlog where Lucas and Shannon discussed how she feels when Lucas and her relationship are compared to his relationship with his reel life lover Amybeth McNulty.

Shannon revealed that she does not feel good when she is compared with Amybeth. On 2nd October 2019, he posted her picture and wrote,

“Building our home together has been one of the best experiences of my life.. despite all those little roaches.”

What is the age of Lucas Jade Zumann?

Lucas Jade Zumann was born on 12th December 2000 in Chicago, Illinois, US. He is 19 years old at present. He is the son of Matthew Zumann and Jennifer Zumann. Similarly, he is the eldest of four children.

“Happy Mother’s Day! Thanks for putting up with me for 16 years!”

Zumann attended Hebrew School which is a Jewish equivalent of Sunday School. After that, he attended Waters Elementary School and when he was in fifth grade he moved to the Chicago Waldorf School till eight grade. Again, he returned to study Chicago for twelfth grade.  He also attended public high school and was homeschooled.

Fans not happy with Lucas

Some fans commented that they disliked him as a person as he was very different from his role in Anne with an E.

“Having an amazing time on press tour for 20th Century Women, this photo is from the Hampton International Film Festival. And Follow me on Twitter.”

Second divorce filing! Adrianne Palicki puts in her papers for the second time for divorce from Scott Grimes!
Tags : Actor Anne with an E