Lucky Blue Smith is an American fashion model and actor. He is also a musician and is in a band The Atomics. He is married and has two children. 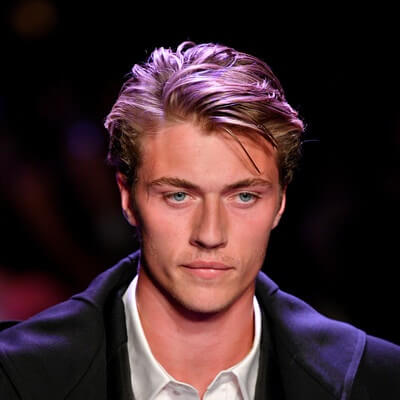 Lucky Blue Smith is a married man. He is married to model, Nara Pellman. The wedding ceremony was held on a romantic beachside on February 21, 2020.

The ceremony was attended by his family and some close friends. The pair started dating in November 2019 and got engaged just a month later.

Recently, this couple has welcomed their first child. They named her Rumble Honey.

Smith was previously in a relationship with Stormi Bree Henley, who is also a model. Bree became Miss Teen USA in 2009. The couple was the most famous model couple on Instagram.

They did not reveal when they initially started dating but confirmed their relationship in an interview in October 2016. Stormi gave birth to their daughter, Gravity Blue Smith in late July 2017. The couple parted ways in 2018.

Who is Lucky Blue Smith?

Lucky Blue Smith is an American model, musician, and actor. He has made appearances in the cover of ‘Vogue’ and was signed by an international modeling agency at the age of 12.

Lucky Blue Smith was born on June 4, 1998, in Spanish Fork, Utah, the United States of America. As of 2020, his age is 22. He was born to parents, Sheridan Smith(mother) and Dallon Smith(father).

His mother was formerly a model and his father is a hobbyist musician who has his own guitar-string company. He grew up with his three siblings, older sisters Starlie Cheyenne Smith, Daisy Clementine Smith, and Pyper America Smith in Spanish Fork, Utah. All of his sisters are models and social media influencers.

Smith and his three sisters were scouted in Utah when he was just 10 years old. He began his modeling career aged 12. After being signed with Next Management, the whole family moved to Los Angeles, California.

He is Mormon and belongs to Anglo-American ethnicity.

There is not much information about his educational background. However, he has revealed that he was homeschooled.

Lucky Blue Smith and his three sisters were scouted in Utah when he was just 10. He started his modeling career aged 12 after being signed by Next Management.

His breakthrough came after he dyed his hair from ash blonde to a platinum blonde color suggested by his agent. This decision changed everything. He did his first photo shoot at the age of 12 for Vogue. In 2015, Teen Magazine named him the Model of the Moment. The same year, he also appeared on the Ellen DeGeneres Show.

Throughout his career, Smith has walked for many fashion shows including Tom Ford, Hendi, Jeremy Scott among others. Tom Ford himself has gifted Lucky an eye-catching Tom Ford tuxedo. Moreover, he has also featured in the cover of several top magazines like GQ, W, Vogue, Elle, V, Numero, Marie Claire, Love, and more.

In 2016, he starred as Bridger Jenkins in the movie ‘Love Everlasting.’ Also, he is in a band named The Atomics. He is the drummer of the band.

Lucky Blue Smith has an estimated net worth of around $1 million. He has not revealed his salary. With around 3 million followers on Instagram, he can earn around $5,900 – $9,800 per post.

Smith became a father at age 19. People criticized him saying he can’t handle or take care of a baby at such a young age. However, he did well with taking care of the baby.

Also, after his split with Stormi Bree, who is the mother of his daughter, people accused him of not spending enough time with the baby just because he had not posted pictures with his baby.

Smith was quick to dismiss such comments made against him with posts on social media sites explaining that he does spend time with his baby and just defended his decision of keeping his daughter off social media.

The dashing model stands at a height of 6 feet 3 inches and weighs around 78 kg.

His dark blonde hair and blue eyes add more to his charm. Similarly, he has a chest size of 39 inches, a waist size of 30 inches, and his biceps are 13 inches.

You may also like to read about Luis Fonsi, Clara Alonso, and Luke Evans.