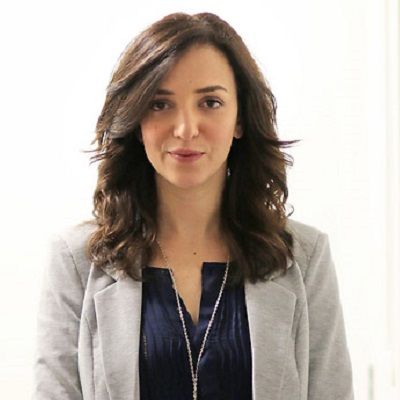 We have other things to get over besides the occupation and discrimination. We are fighters and don't give in. If you don't open the door for me, I will come in through the window, and if it is closed, down the chimney. We were too polite, but we learned Israeli chutzpah. It's easy to humiliate an Arab who kowtows, but when that person says 'Listen, pal, tone it down, don't talk to me like that,' you arrive at a dialogue

What's more important for me is the brand name Lucy Aharish. The Arab sector does not pay me a salary. My national identity is that of an Arab-Israeli. I identify with Palestinian suffering, but I am not part of it. I have a different suffering here: I am not getting the rights that accrue to me as a citizen of Israel – such as better mortgage terms – because I did not do army service.

Lucy Aharish is married to Israeli-Jew actor Tsahi Halevi since October 10, 2018. Aharish is an Israeli-Muslim whereas her husband is a Muslim-Jew. The wedding was kept a secret by the two celebrities. They had asked the guests to keep the invitations discreet and they informed the public only after the wedding was over.  This was not only because of the paparazzi.

Even though Israel is shared by Muslims and Jews, there remains a taboo of inter-faith relationships. This was the reason that the wedding was kept a secret.

So far, this couple doesn’t have any children and are living in Tel Aviv-Yafo, Israel.

Who is Lucy Aharish?

Lucy Aharish is an Israeli-Arab news anchor, presenter, reporter, and television host and an actress. She is famous for being the first Arab news presenter on Hebrew-language Israeli TV. Currently, she is a news anchor at Reshet 13 and a morning anchor at channel 2.

Aharish is currently 37 years old according to her birth year which is 1981. She was born in Israeli town Dimona to Maaruf and Salwa Aharish, her parents who were originally from Nazareth. Also, she has two elder sisters and is the youngest of three daughters to her parents.

Her nationality is Israeli but ethnicity is unknown.

After graduating from her high school, Lucy joined the Hebrew University of Jerusalem to study social sciences and theater. There, she got the idea of pursuing her career as a journalist.

After graduation, she studied Journalism in Tel Aviv at the Koteret school. And, after that, she interned for over a year in a school located in Germany.

She started her career as a journalist when she got the opportunity to work for two weeks as an Arab affairs reporter for Yedioth Ahronoth. Then, she became the first Arab to present the news on mainstream Israeli TV in 2007 when she was hired by Channel 10.

She left that job in 2008 and started reporting in Channel 10’s ‘Erev Tov’ with Guy Pines and became a co-host in a morning show. Also, she co-hosted a late-night show on Channel One called ‘Nivheret ha-Halomot’ and ‘Hamahadura’ which was a current events program for teenagers.

In April of 2015, Lucy Aharish was chosen as one of the 12 Israeli famous personalities to light torches in the opening ceremony of the 67th Israeli Independence Day.

She is also a great actress. Her debut as an actress was in ‘Under The Same Sun’. She is mainly known for her work in ‘Your Honor’, ‘Mossad’ and ‘Happiness Wrapped in a Blanket’.

In 2018, the Israeli Television Academy nominated her for the Best Interview Program for ‘HaMashpim’. Unfortunately, she hasn’t won any awards to date.

According to various online resources, Lucy Aharish’s estimated net worth is still under review. However, it is estimated that it is between $100K-$1 million approx. Her annual salary is also under review. Her primary income source is TV.

As an anchor at i24 news, Aharish’s time was quite volatile. During ‘Operation Protective Edge’, she had done an on-air interview with an official of ‘Hamas’ in ‘Gaza’. In this interview, she accused Hamas of using civilians as human shields. Moreover, she also encouraged the Gazan residents to rebel against the regime of Hamas.

Lucy Aharish’s height is 5 ft 3 inches but her weight is unknown. Her hair color is brown and eye color hazel. She wears a dress size of 4 US and a shoe size of 8 US.