Lucy DeVito has kept most of the information about her personal life away from the media spotlight. There are no records available about her past relationships. At present, she is believed to be single. 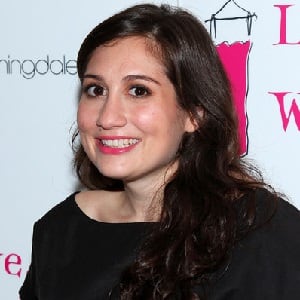 Who is Lucy DeVito?

Lucy DeVito is an American actress. People mostly know her as the daughter of actors Danny DeVito and Rhea Perlman. She appeared as Anne Frank in a production of Anne Frank at the Intiman Theatre in Seattle.

DeVito was born in New York City, New York on March 11, 1983. She was born to parents Danny DeVito and Rhea Perlman. Both her parents are actors.

Additionally, she has two younger siblings, Grace Fan DeVito, and Jacob Daniel DeVito. Lucy is of American nationality. Furthermore, she belongs to an Italian ethnic background.

DeVito initially appeared in ‘This Revolution’ in 2005. Additionally, in 2006, Lucy appeared as a cashier in the TV series ‘Crumbs.’ In 2007, she appeared in ‘The Good Night’, ‘Dirt’, and ‘Nobel Son.’ She also had roles in ‘It’s Always Sunny in Philadelphia’ and ‘Just Add Water.’ Since then, she has appeared in several other movies and television series. All in all, she has over 35 credits as an actress.

Some other movies and television series that DeVito has appeared in include ‘Shameless’, ‘The Marvelous Mrs. Maisel’, ‘Can You Ever Forgive Me?’, ‘Cady Did’, ‘Adults’, ‘Speech & Debate’, ‘Patriettes’, ‘A Cinderella Christmas’, ‘The Comedian’, ‘Deadbeat’, ‘Girls’, ‘Santa Con’, ‘Alpha House’, ‘How to Succeed at Birth’, ‘Syrup’, ‘CrimeFighters’, ‘Melissa & Joey’, ‘The Share’, ‘Sleepwalk with Me’, ‘Second City This Week’, ‘Beware the Gonzo’, ‘Leaves of Grass’, and ‘A Quiet Little Marriage’ among others.

DeVito has not been linked with any award nominations in her career.

DeVito has not revealed her current salary. Furthermore, there are no details available about her estimated net worth at present.

DeVito has not been part of any notable controversies in her career. Furthermore, at present, there are no rumors concerning her life and career.

Talking about her body measurement, DeVito has a height of 4 feet 11 inches (1.5 m). Additionally, she weighs around 42 kg. Furthermore, her hair color and eye color are dark browns.