Posted by MarriedBiography Posted on February 24, 2021 | In Dating , Net Worth , Relationship
Share this 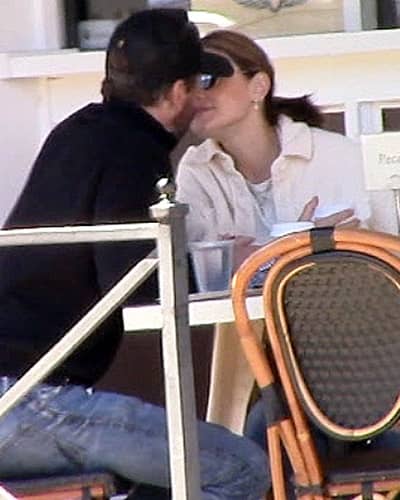 Pretty Little Liars Lucy Hale had a lunch and a sweet kiss! Will Skeet Ulrich be the dad of her dogs Elvis and Ethel?

Lucy who was in the TV series Riverdale was seen having a small PDA moment with her co-star Skeet Ulrich on their afternoon lunch date at Sweet Butter Kitchen in Southern California. Skeet Ulrich has been the cast member of Riverdale from its first season as F.P. Jones. He is the hot badass dad of Jughead is winning the heart of gorgeous single Lucy Hale.

Likewise, Fans were definitely not hoping their romance to form off-screen and their kissing date came as a shock. It is known that the two were set for a date by a mutual friend. They have an exact age-difference of 20 years. As per sources,

“They know a lot of the same people in the acting circle and connected recently. It’s very new. They are both really into each other and have been dating for about a month.”

More about their date

Even though Lucy Hale and Skeet Ulrich’s relationship is called ‘casual’ but they are actually seeing each other more often. It seems like something serious is cooking between them. Lucy, who had been quarantining alone in her apartment made everyone’s life better with her hilarious ‘How not to bake Banana Bread’ video with W Magazine. Seems like Hale has found a partner as she and Skeet have been hanging out at each other’s home. Also, the source explained,

“They spend a lot of time at each other’s homes just hanging out and being low key. Lucy thinks Skeet is very charming and sweet. She likes that he is a dedicated dad.”

Lucy Hale has an estimated net worth of $6 million as per Celebrity Net Worth. She received a salary of $42 thousand per episode in the series. Similarly, as a singer, on 3rd June 2014, she released an album titled Road Between. She has appeared on songs like Road Between, A Hollywood Chrismas, We Love Disney, and A Hollywood Chrismas.

In 2019, Lucy kept her Los Angeles mansion for sale for $2.5 million. Also, the Spanish-style house was built in the year 2004 and consists of four bedrooms and four bathrooms located in Studio City. Likewise, the 3,880 square foot home features a built-in dishwasher, microwave, refrigerator, and a range hood in the kitchen.

Also read Joe Giudice has a new girlfriend Daniela Fittipaldi! How much is the net worth of Joe Giudice in 2021?

Lucy Hale is an American actress and singer. She is popularly known for her role as Aria Montgomery in the Freeform series ‘Pretty Little Liars’. Read more bio…