British actress and former model. She is known for appearing in Dangerous Game, Age of Kill, and more. 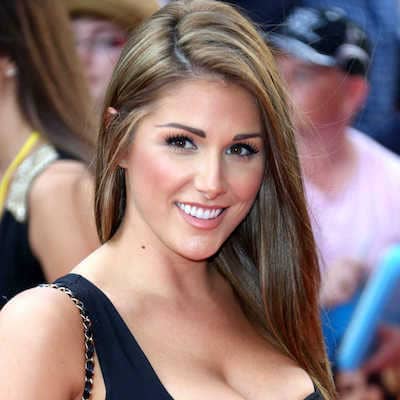 A fight between Michelle Marsh and me would be over pretty quickly. I think we'd end up suffocating each other with our breasts

I don't get chatted up really, but I think that might have something to do with the fact I'm not really one for attracting attention. More a quiet night-in sort of girl

A man who is comfortable and sure about who he is is far more attractive than someone trying to be flash or be something that they're not. Rugged good looks help too, lol!

What is the relationship of Lucy Pinder?

Lucy Pinder is possibly single at present. The details of her current romance and boyfriend are unknown.

But in the year 2015, she had a fling with an actor Chris Evans. The rumors of them dating were spread after they were spotted together at the Disney California Adventure Park.

Lucy was also rumored to have an affair with NFL player Tim Tebow. She dated a guy named Daniel Hooper for three years but eventually, they broke up.

Who is Lucy Pinder?

Lucy Pinder is a British actress and former model. She is known for appearing in Dangerous Game, Age of Kill, and more.

She is also involved in charity work and supports TigerTime, the David Shepherd Wildlife Foundation, and International Animal Rescue. In addition, she worked with Cats Protection plus Help For Heros.

Her birthdate is 20 Dec 1983 but she was born in Winchester, Hampshire, England, the UK as Lucy Katherine Pinder. The name of her mother is Jenny Pinder but her father’s details are unknown.

Lucy’s ancestry is English and has an older sister Emily.

As per her academics, she studied at Westgate Secondary School and Peter Symonds College. She also decided to enroll at the University of Winchester but decided to focus on her career.

Lucy Pinder started her modeling career after discovering herself on a beach. She was spotted by a photographer. Her popularity led her in featuring on the Daily Star, FHM, Loaded, and Nuts.

A magazine Ralph appreciated her busts and declared them the “Best Breasts in the World” 2007.

She also appeared in movies such as Strippers vs Werewolves in 2012, Waarrior Savitri in 2016, Sharknado 5: Global Swarming in 2017, etc. Her upcoming films Nightmare on 34th Street plus The Bystanders are goind=g to release soon.

Lucy is also popular for her TV roles such as Bo! in the USA, Hotel Babylon, The Royals, and Dream Team. She also appeared in reality shows. Some of them are,

She has collected an estimated net worth of around $3 million as of 2022. But, the salary and other earnings from her career are not disclosed.

She did an advertisement for a deodorant brand, Lynx. Also, she was in Lynx shower gel’s print ad.

This ex-glamour model is keeping herself away from rumors and desperate scandals.

Regarding Lucy Pinder’s body features, her height is 5 ft 5 inches and her body weight is 59 kg.

Moreover, her eyes are dark brown and her hair is light brown. Her skin complexion is fair but her body stats are 39-26-34 inches.

She wears a shoe size of 6 US and a dresses size of 4 US.

Similarly, she has gained more than 1.4 million fans on her Facebook page.