Lucy Watson started going out with her Made in Chelsea ­co-star Andy Jordan towards the end of 2012. Unfortunately for Jordan, their relationship came to a cruel end after she dumped him at the dinner date in December by stating that their relationship wasn’t going anywhere.

Lucy was reported to have hooked up with reality star Alexander Mytton in the mid-2013. However, their fledgling relationship didn’t last long as Lucy dumped Alex for Spencer Mathews while on a trip to Barcelona in June 2013.

Lucy started dating TV personality, Spencer Matthews after he won her over during Barcelona trip by claiming that he had eyes only for her. Shortly after, they were spotted out on various events and functions. But their relationship didn’t last beyond the summer of 2013 as he confessed that he had cheated on his girlfriend.

She later revealed that even after their breakup he had tried to woo her for a night together. Lucy was going out with former rugby union star, Jordan Turner-Hall after they were spotted on a date at a restaurant in London in 2013.

Lucy Watson had a relationship with actor Jamie Laing. Jamie seemed to be very keen about her but, she seemed hot and cold for him and their affair ultimately came to end after she hooked up with Oliver Proudlock. Additionally, Lucy Watson also started going out with model Oliver Proudlock in October 2014.

They made their relationship public by stepping out together at the JOOP! Crazy Party, Disco, and Cirque le Soir. They had started going out in New York City but didn’t go out on an official date. It had all started with a couple of drunken kisses. However, their relationship fizzled out a couple of months later as it was revealed that he was seeing other women at the same time.

Lucy Watson started dating reality TV star, James Dunmore in early 2015 after having grown close to him while working in Made in Chelsea. After making their relationship public, they headed out for a series of well-publicized holiday trips. In October 2016, they decided to leave the reality series in order to focus on their relationship. 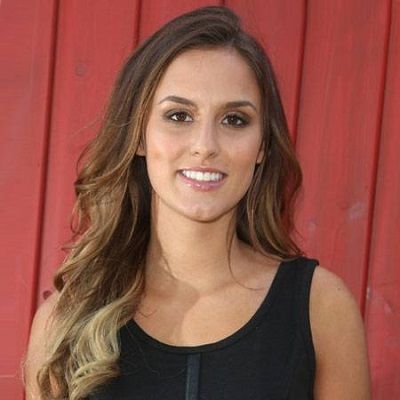 Who is Lucy Watson?

Lucy Watson is a British socialite, reporter, reality star, model, writer, and entrepreneur who became a household name after joining the main cast on the fourth season of E4’s ‘BAFTA’ award-winning structured-reality television series ‘Made in Chelsea’ in 2012.

Lucy Watson was born in Manchester, England on February 20, 1991, and she is currently 28 years old. Her father’s name is Clive Watson (Entrepreneur) and her mother’s name is  Fiona Lygo. There is not much information about her and her family.

She has a sister namely, Tiffany Watson. Lucy holds British citizenship, but her ethnicity is unknown. Her birth sign is Pisces.

Talking about Lucy’s education history, Watson attended St. Catherine School in Bramley and later went to Godalming College. She graduated in Journalism from University to study.

Talking about her profession, Watson for television started when she was a runner for ‘stars in your eyes and then a researcher for ITV programs ‘you have been framed’ and ’60 minutes makeover’ after which she joined the university to study journalism.

Additionally, she worked at BBC Radio Merseyside and then Real Radio in Manchester as a reporter, covering almost major stories. After spending six months in the broadcasting of radio, Watson also began her reporting at ITV Granada in Manchester, then in the year of 2008, she moved to Birmingham to work for ITV Central to present various news bulletins at the weekends and late news programs.

Watson started working for the ITV breakfast program ‘daybreak’ in 2010 when she became the north of England correspondent for Daybreak. Her role remained from 2010 until 201. She was the correspondent of program New York, taking over from Nick Dixon until her departure in 2014.

Watson said goodbye to ‘daybreak’ at the beginning of 2014, and since Feb 2014, she has been a China correspondent for ITV News, based in Beijing, the country’s capital.

Lucy Watson has an estimated net worth of around $4 million as per 2022’s data, and she has earned that sum of money from her professional career. Lucy Watson has had also an endorsement deal with razor and personal care brand, Wilkinson Swords.

Currently, there is no information of her being in any rumors and controversy.

Lucy Watson has a height of 5 feet 5 inches and she weighs is 48Kg. Additionally, she has a measurement of 33-23-33 inches and her bra size is 30C. Lucy’s hair color is dark brown and her eyes color is light brown. Furthermore, her dress size is 4 (US) and her shoe size is 8 (US).